I made a cute coffee center using recycled plastic containers that Greg screwed the lids onto the shelf above what will soon be our kitchen. I used some craft tape and spray paint and some paint markers to decorate the jars.

Greg is getting good at cutting giant holes in the van. He does these while I am at work so that I do not have to experience the anxiety of cutting holes in the van. I come home and the work is done. Pretty amazing! 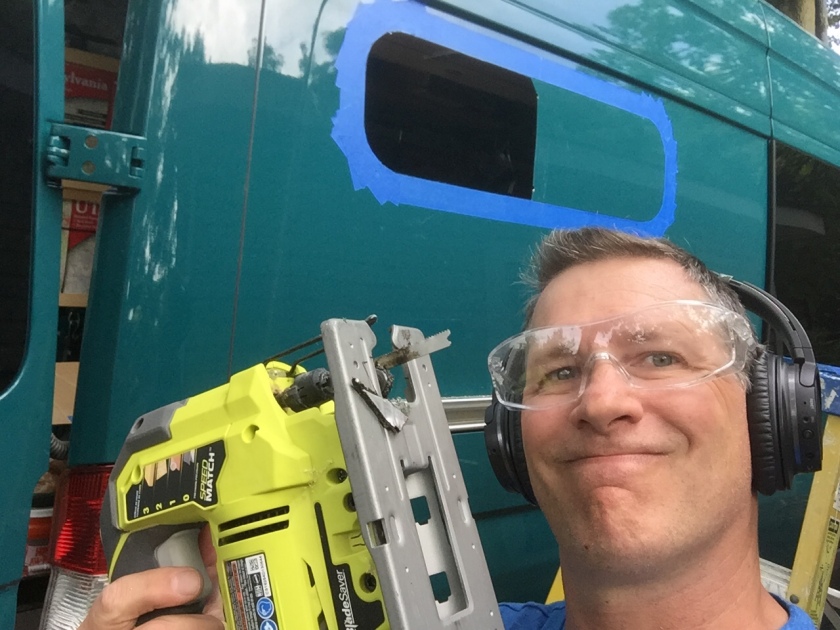 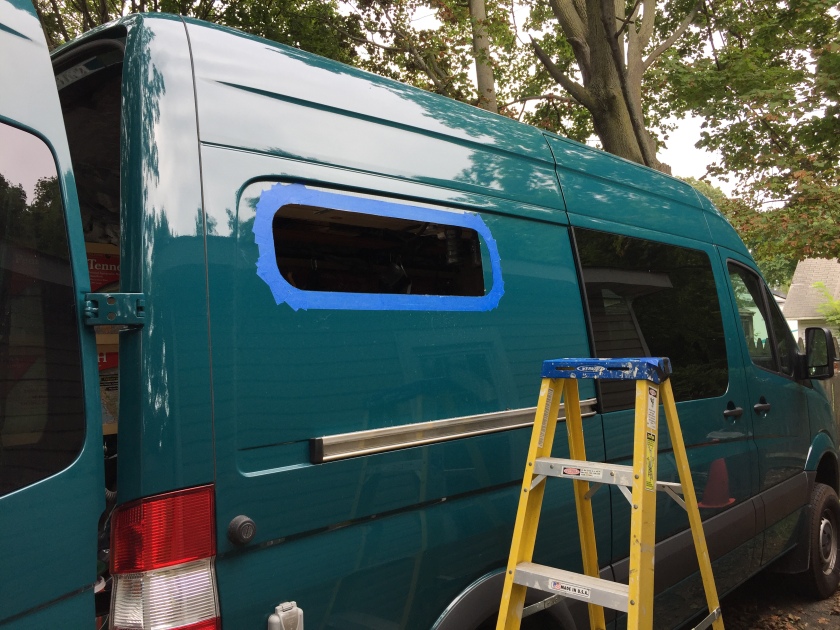 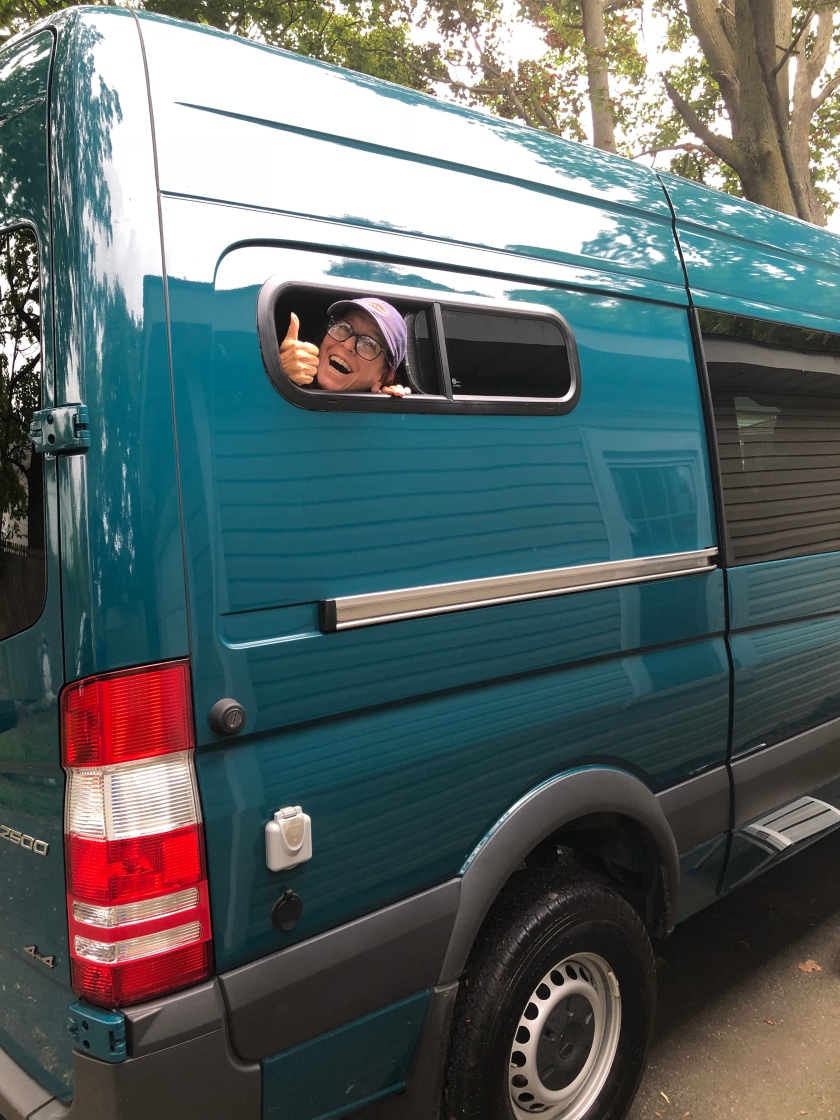 Once the window was in, we were able to put up our kitchen wall.

We had some issues with the original insulation in the ceiling. The pink insulation that was under the tin ceiling was squeaking like crazy while we were driving so down came the ceiling and out came the insulation. We decided to go with the thinsulate insulation instead which had to be installed with some wood slats.

Also my original canvas bedding came crashing down one night while sleeping. We bought some sturdier canvas and our seamstress was hard at work triple sewing the seams. 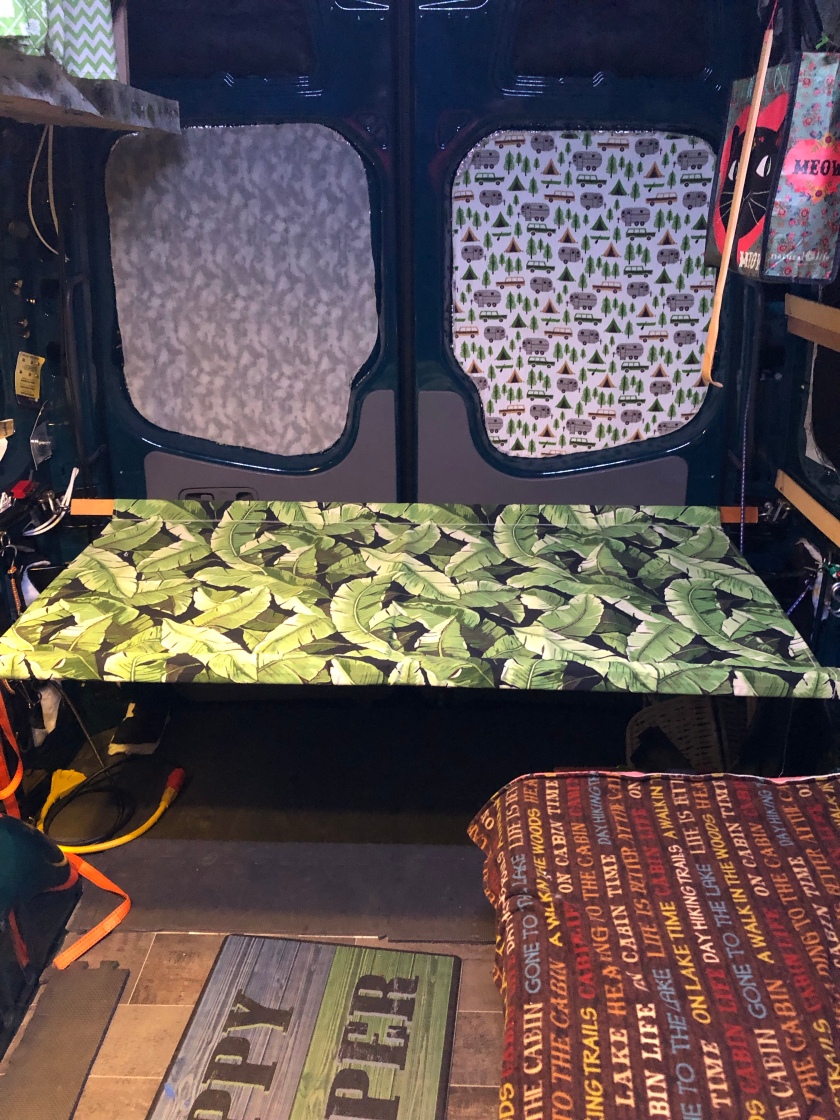 Greg found a fun “Cafe Patina” light for the wall above his bed. He was able to connect it to the solar battery system using a 12 volt bulb which he learned from the solar handbook that he found at the library that he could use any 110 lighting fixtures as long as you change out the light bulb to a 12 volt DC bulb. 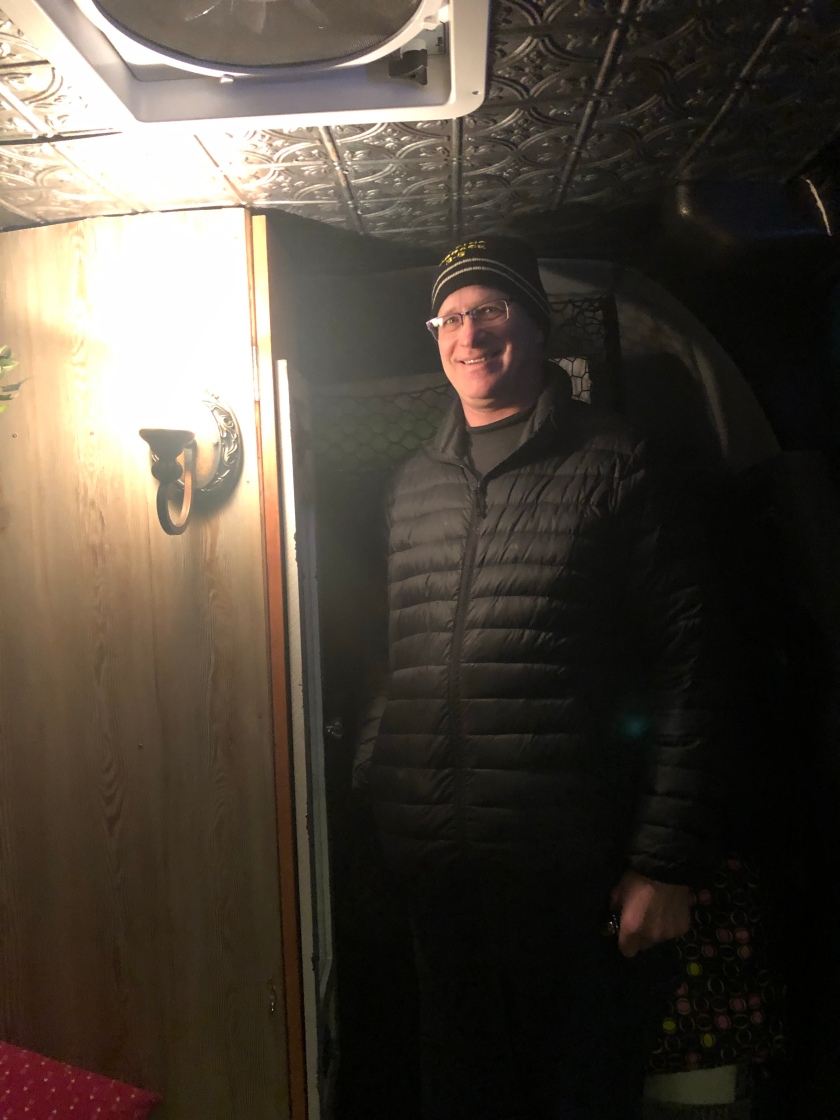 We bought a second flexible.solar panel for the roof to help with powering the van. These flexible panels are amazing. Very light weight and easy to install on the roof using aluminum strips that he attached to the roof rack channels.

Next step we had to call on the Big Guns to help with something that we just couldn’t do on our own. Our kitchen cabinets, countertop and fridge drawer. Let me tell you about our kitchen. It’s the most beautiful part of the van because it was made with love by My Buddy, Mike McGerk!! Here are some photos of just how beautiful it is. It’s everything I imagined it would be.       

If you look to the drivers area, you’ll see some netting that fit perfectly up there. We store all the reflectix window coverings up there in that netting, as well as our screen doors when not in use.

Greg was able to install the kitchen set up ti the van using pipe straps and a steel bracket in the back attaching it to the frame of the van. 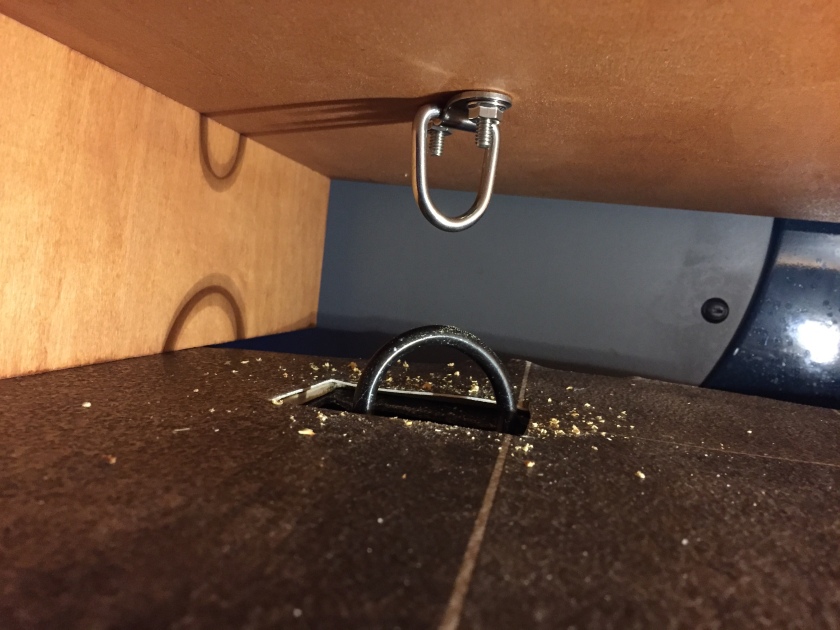 Let’s talk about poop, shall we? We decided against a shower and bathroom inside the van. After all, we are backpackers and if you are a backpacker, you know how minimally you can live especially without a bathroom or a shower. However, let’s say we are boondocking in the mountains for a couple of weeks, we will need a shower and a toilet at some point. So we went with a compostable toilet, a luggable Lou. We are used to this because our outhouse at the cabin has the same set up. I had won a pop open shower room in a raffle and so it’s the perfect place to put the luggable Lou and to shower in there as well. We found that a garden pressure sprayer that you pump is great for showering. We also have a black shower bag to hang to warm the water as well. 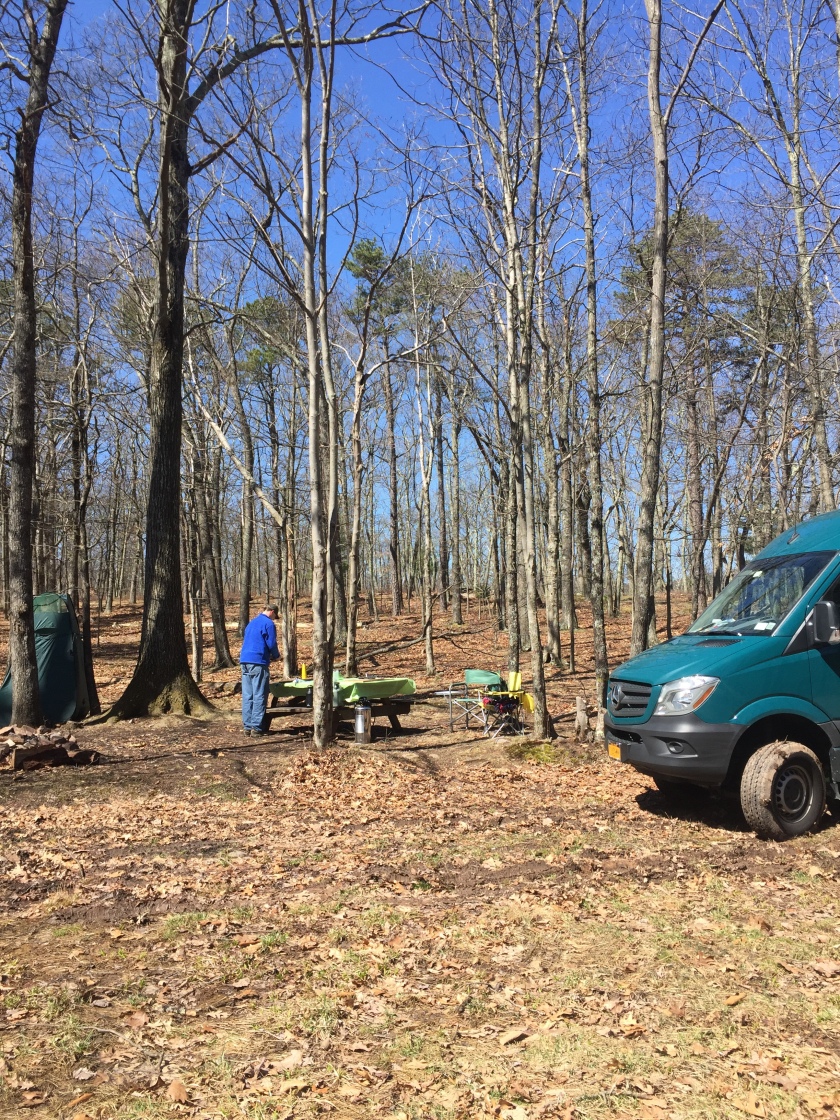 I decided to paint a little decorative picture for the back side of the kitchen cabinet. I used peg board so that the fridge would still have the needed ventilation .

Our next project and by far the hardest was the installation of the Dometic Awning. This was a thorn in our side but we had already purchased this rather expensive piece of equipment and had to somehow find a way to be able to use it. Here’s when another McGerk Family member comes to the rescue. Our friend Timmy came up with an idea for brackets. He knew some welders that were able to fabricate the brackets. And then he and Greg were then able to install the awning. This was after many trials and errors and a lot of thinking and inventing and thinking some more. In the end, the awning was installed with some hiccups along the way, but we wouldn’t have it any other way especially in a rain storm. We didn’t want to be stuck in the van whenever it rained. 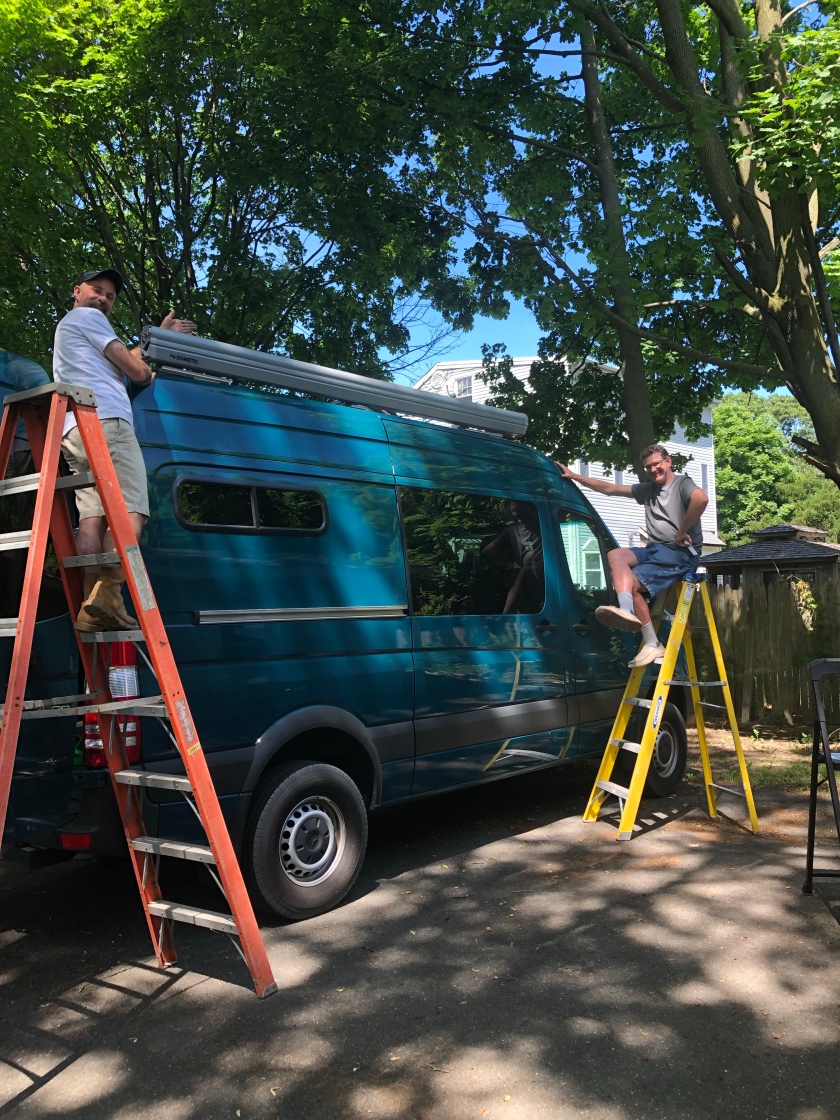 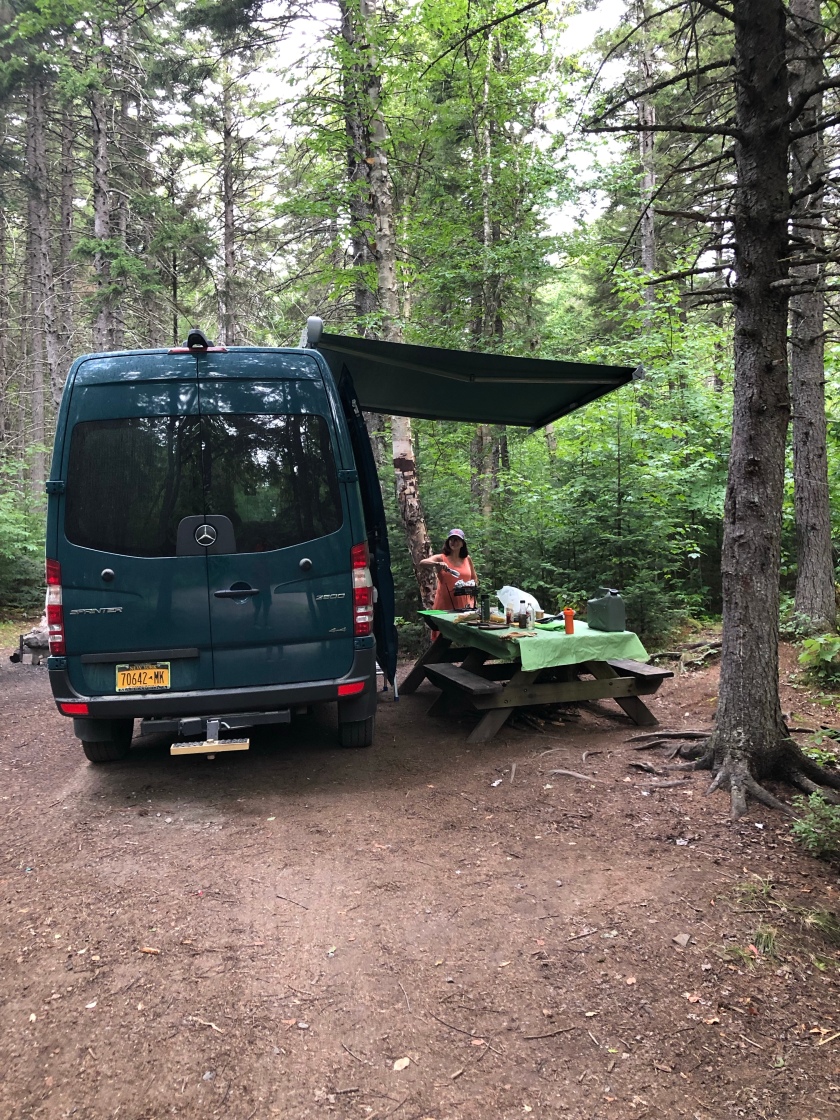 And the last and final thing we added was the screen doors for both the side and back doors.

We still have a lot more things to complete but honestly I don’t think it will ever be completely finished. We will always be working on one thing or another. Our next project are cabinet doors for the shelves above the kitchen area.