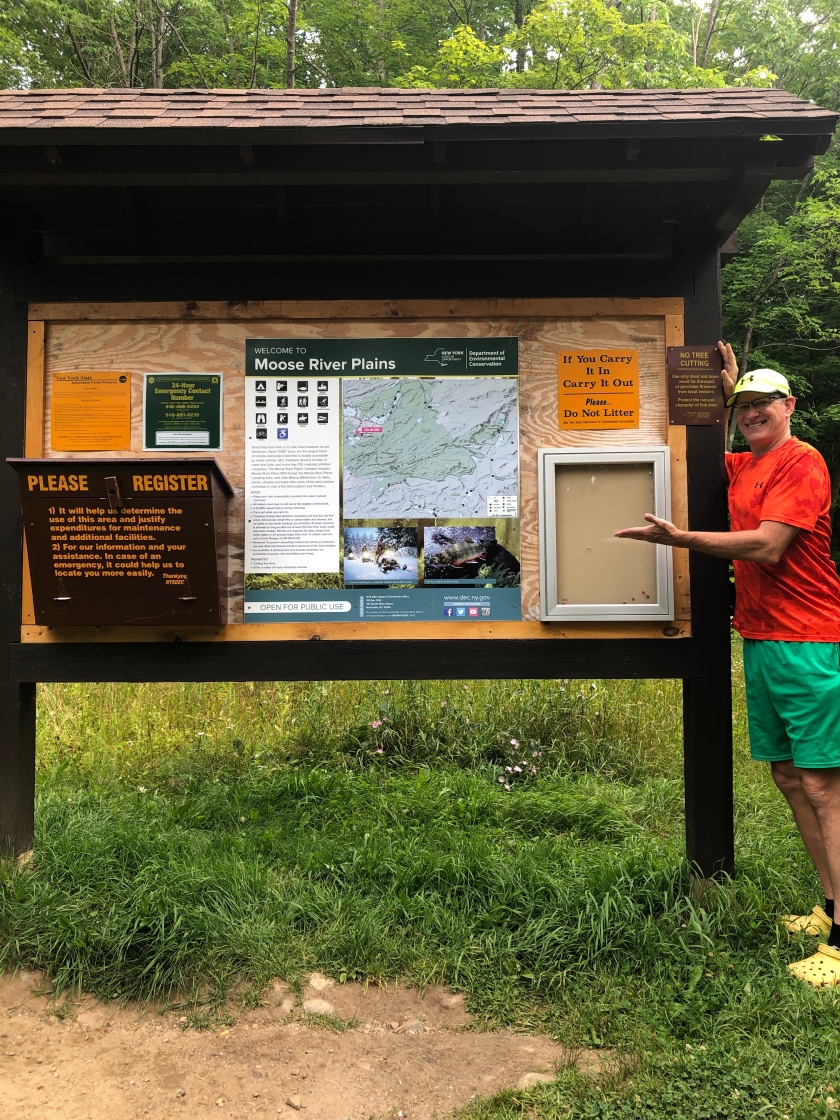 We decided to take a little break from our renovations. The bed at the new place was nailed together and nailed to the wall and nailed to the ground using 2 by 4’s and 2 by 6,s. I don’t know if the guy who built the bed was expecting daily earthquakes but it was definitely overkill and ridiculously hard for Greg to take apart and get out of there. The good news is that most of that wood will be used in the new kitchen so that works out for us. 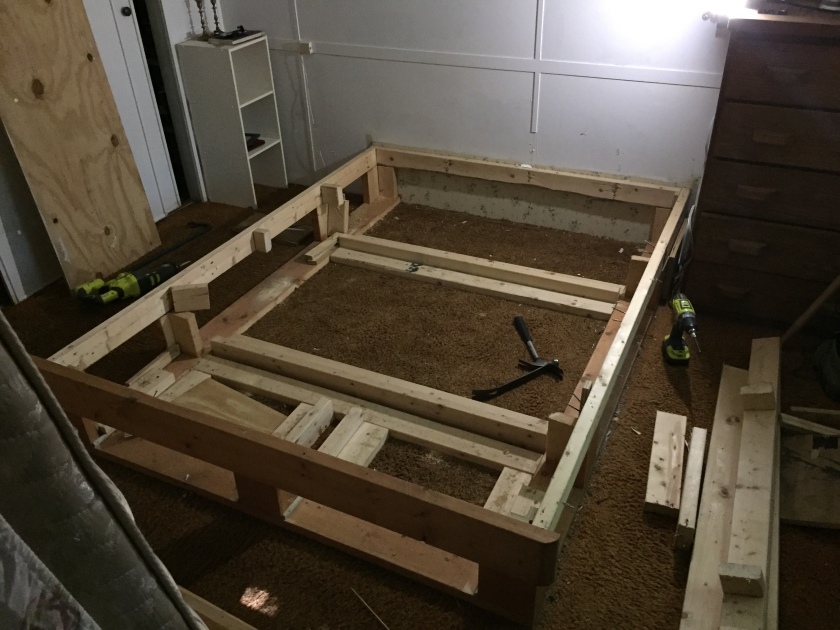 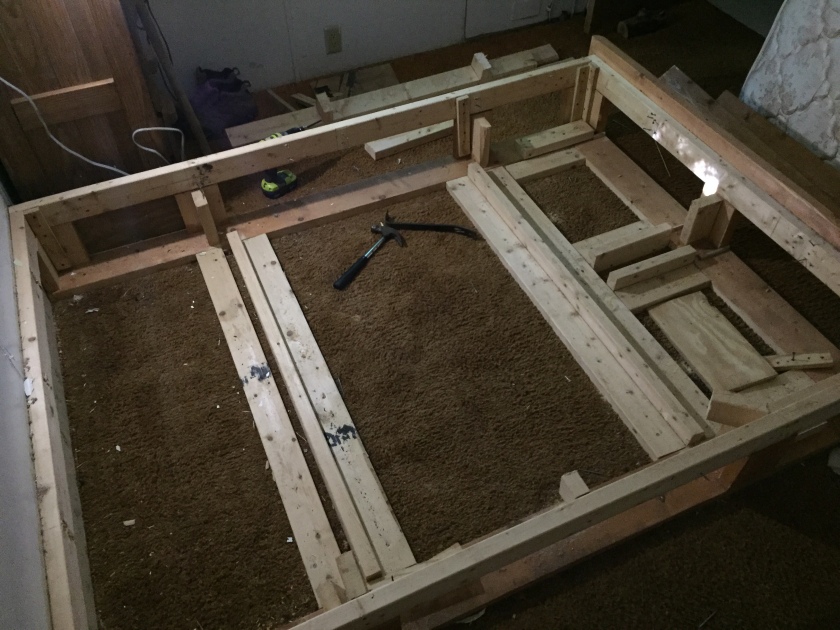 While Greg was doing that I continued painting the kitchen cabinets and walls. I’m thinking one more coat should do it. 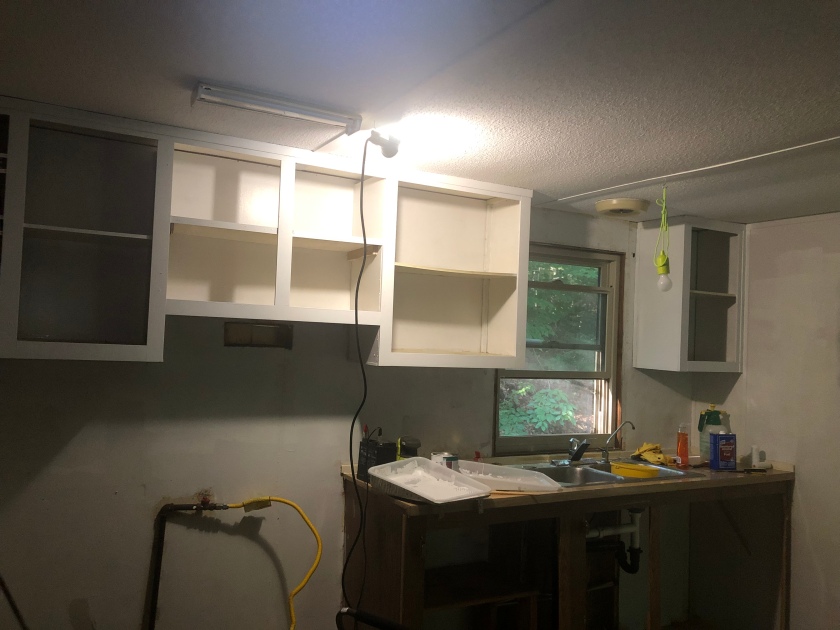 I’m really looking forward to how the kitchen is going to turn out especially now that we got a porcelain table from our friends Jerry and Cindy. It matches the stove perfectly. It’s amazing they had this table in their loft. I love it!! 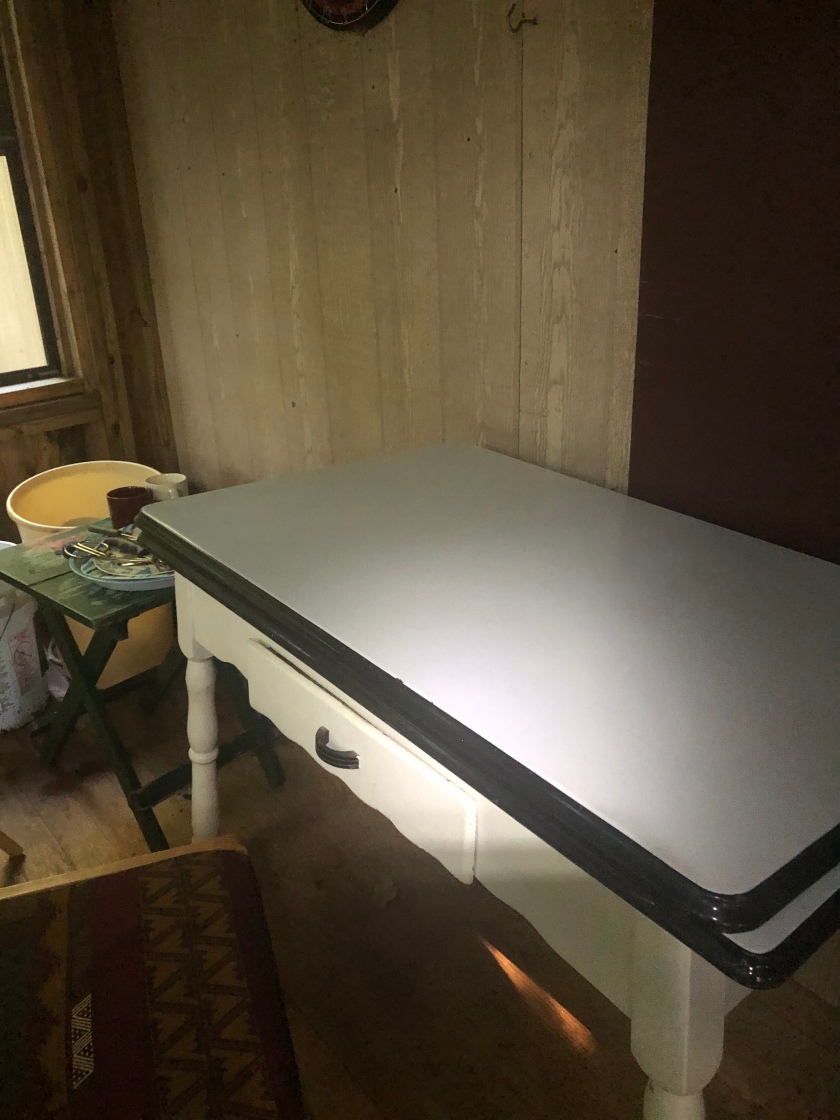 So after a few busy days of renovating, we needed to get back into the woods. Our first night stop was the campsite #61. It had an open door outhouse and a great picnic table for cooking. 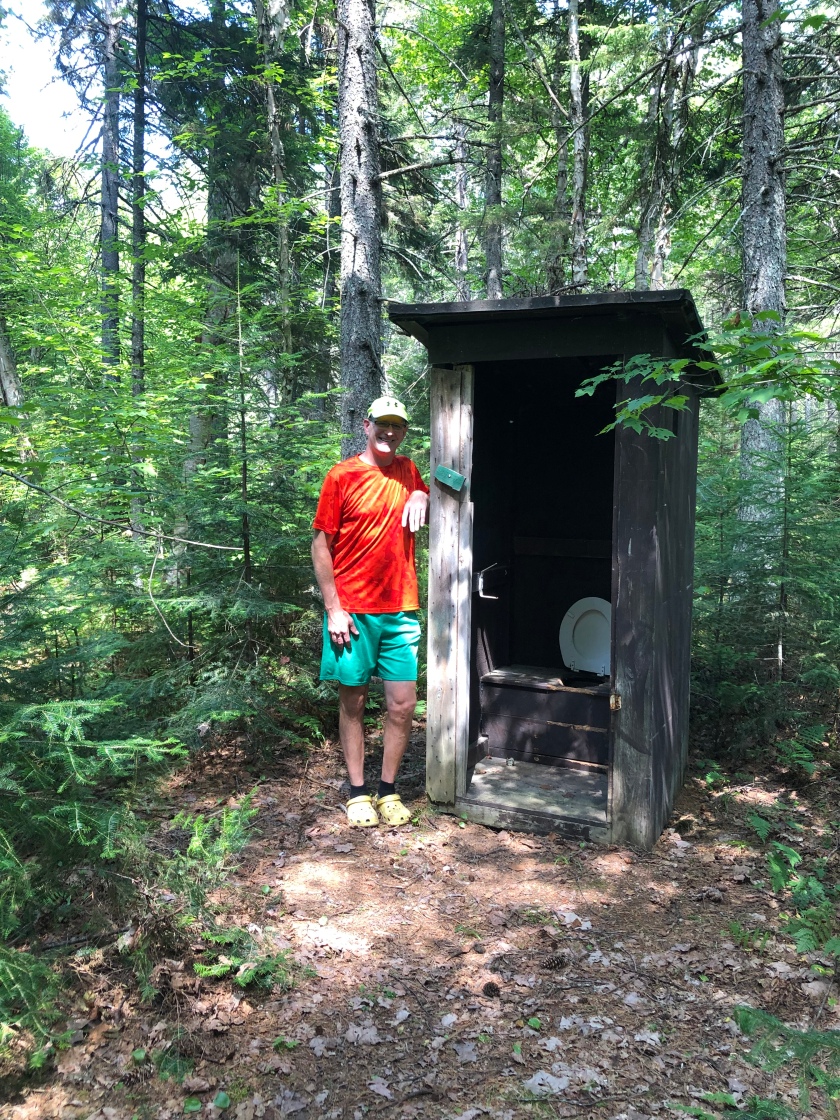 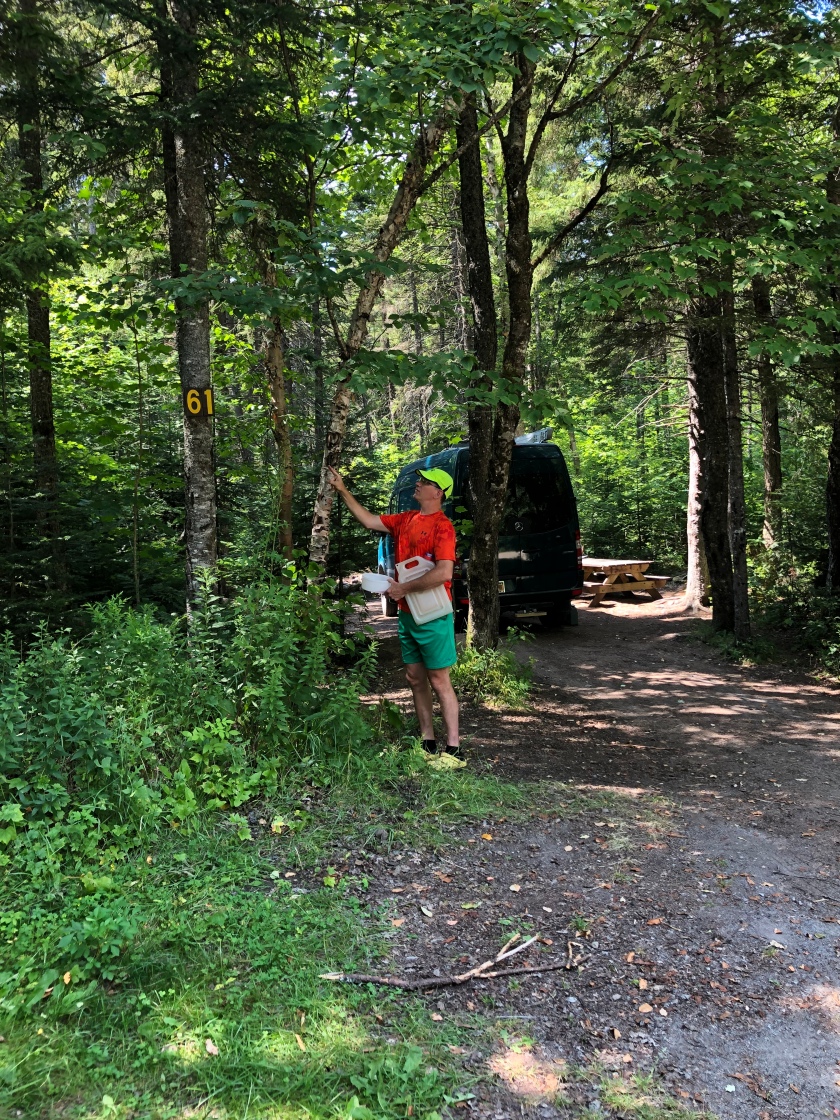 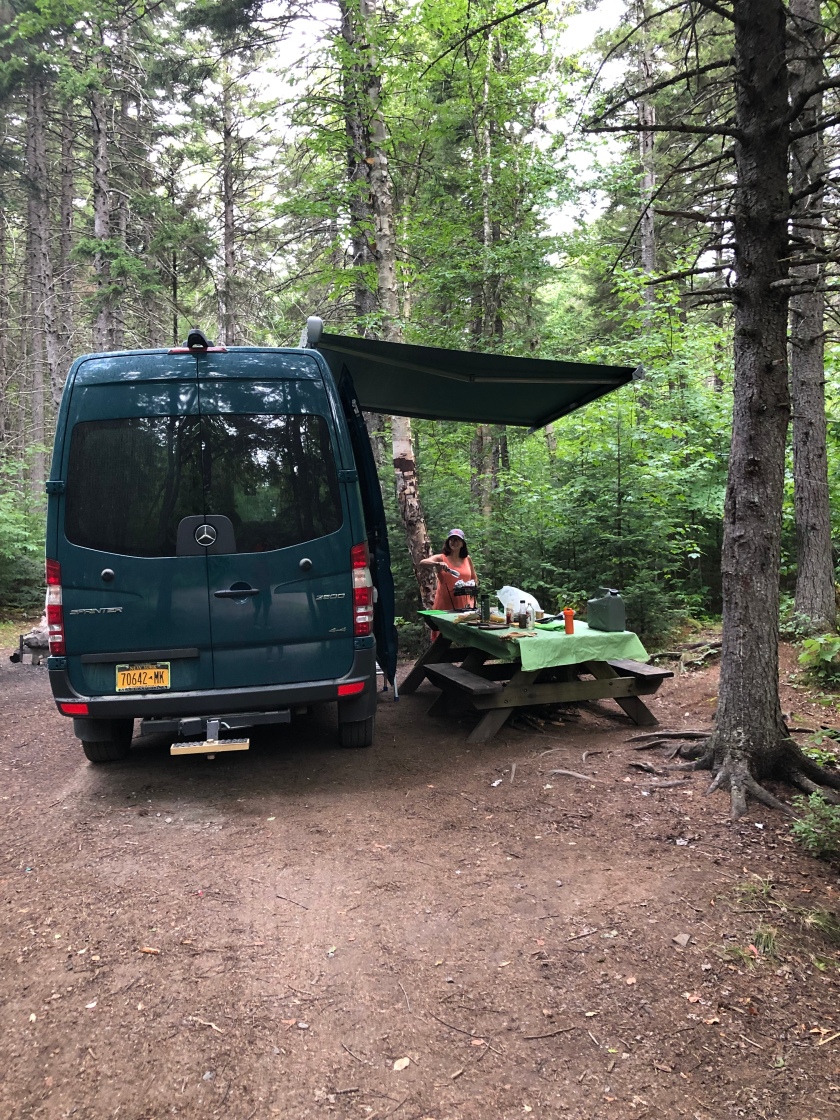 We heard from our friend Jan that the blueberry picking was good here so we took a bowl and went on a little hike in search of some blueberries. We didn’t need to go far, they were everywhere!! 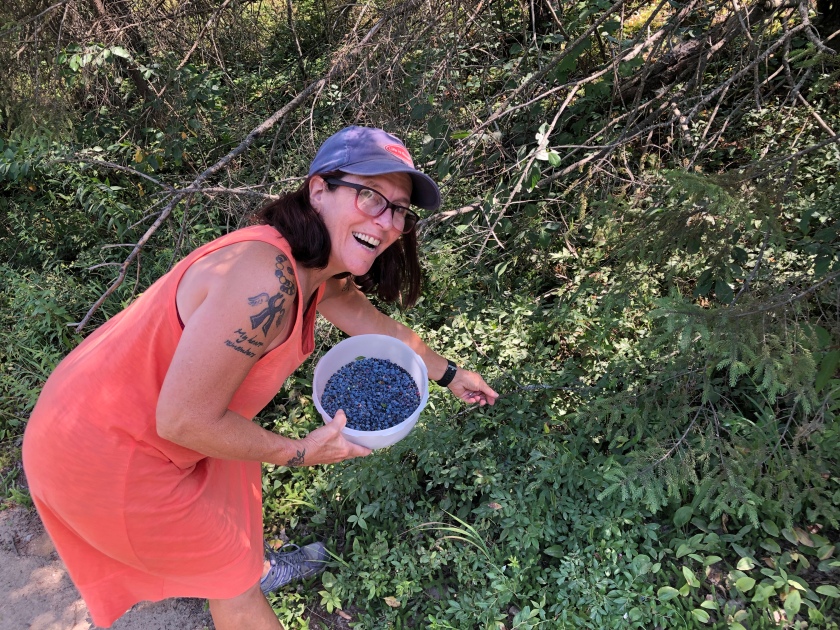 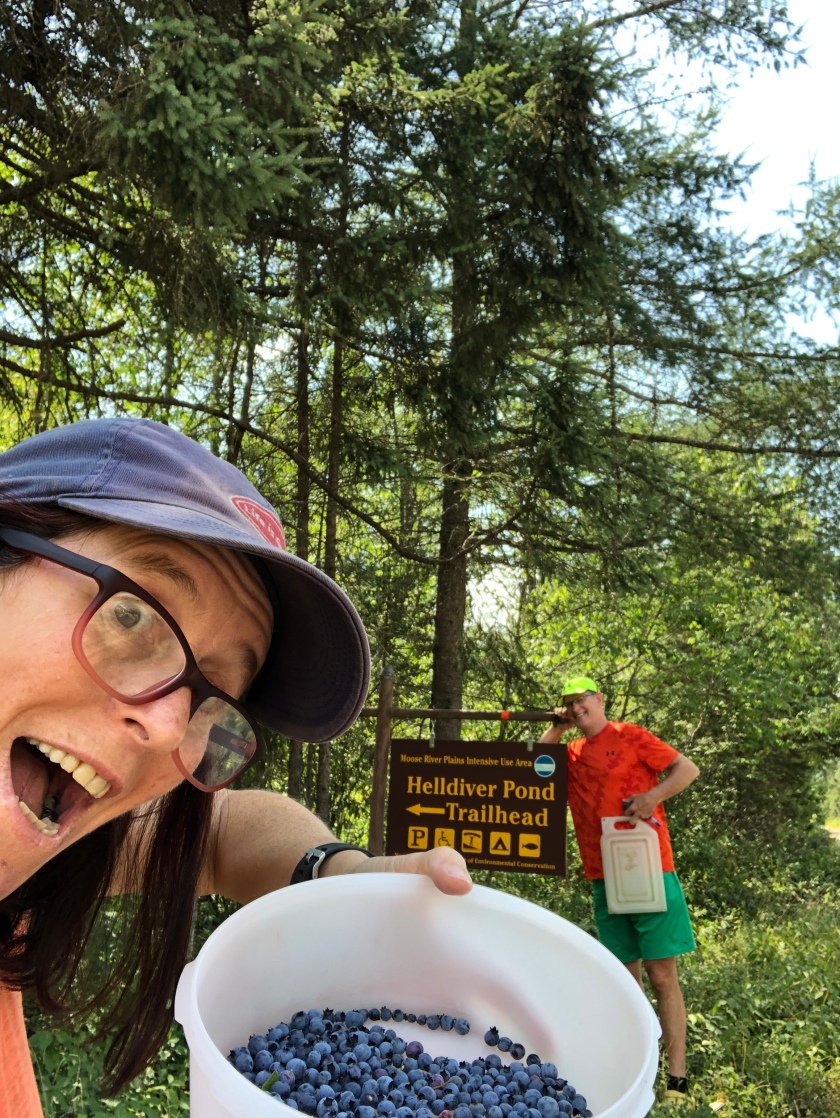 We received a package in the mail

On Tuesday, it was our new magnetic screen for the sliding door. Came at the perfect time and the bugs at the Moose River Plains were the perfect test to see how it worked. It works great!! Not a single bug got into the van, except for this giant caterpillar on the back of Greg’s neck. Lol 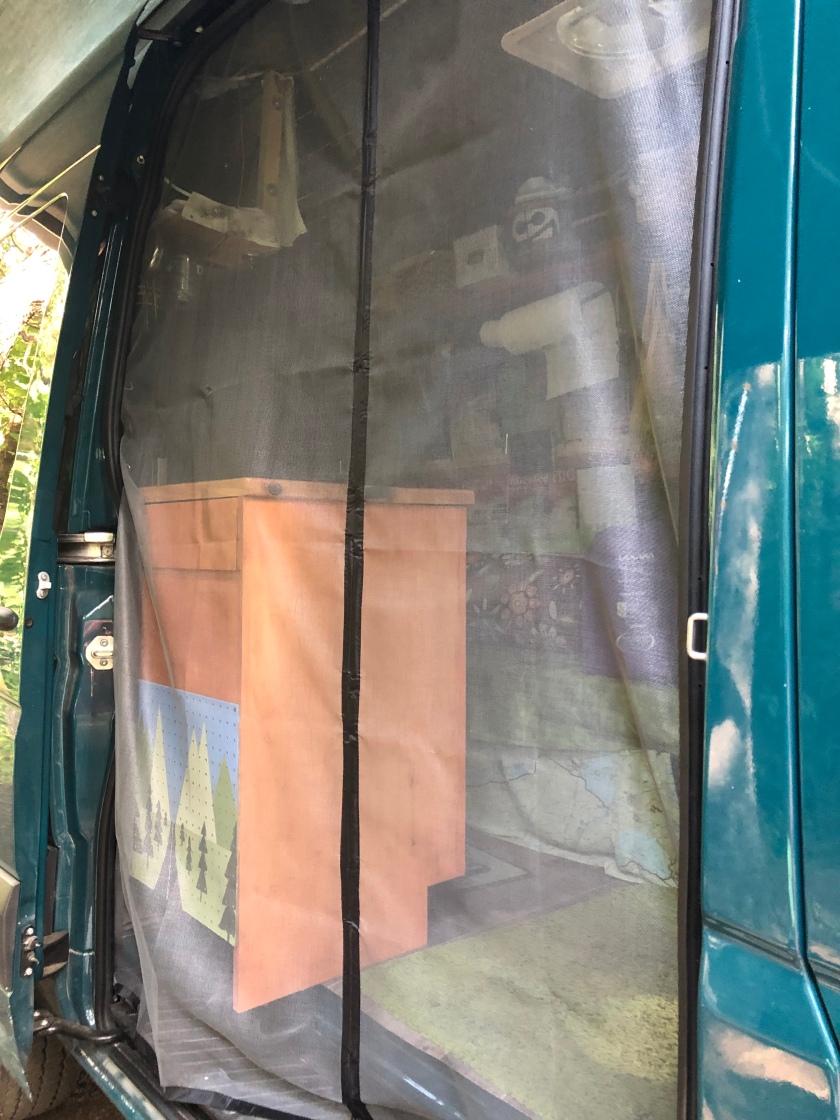 We also had a chance to test out the new awning. First Greg had to snap a few pine branches that were in the way. Good thing we carry an extension ladder. We were very glad to have the awning cause it rained during dinner. 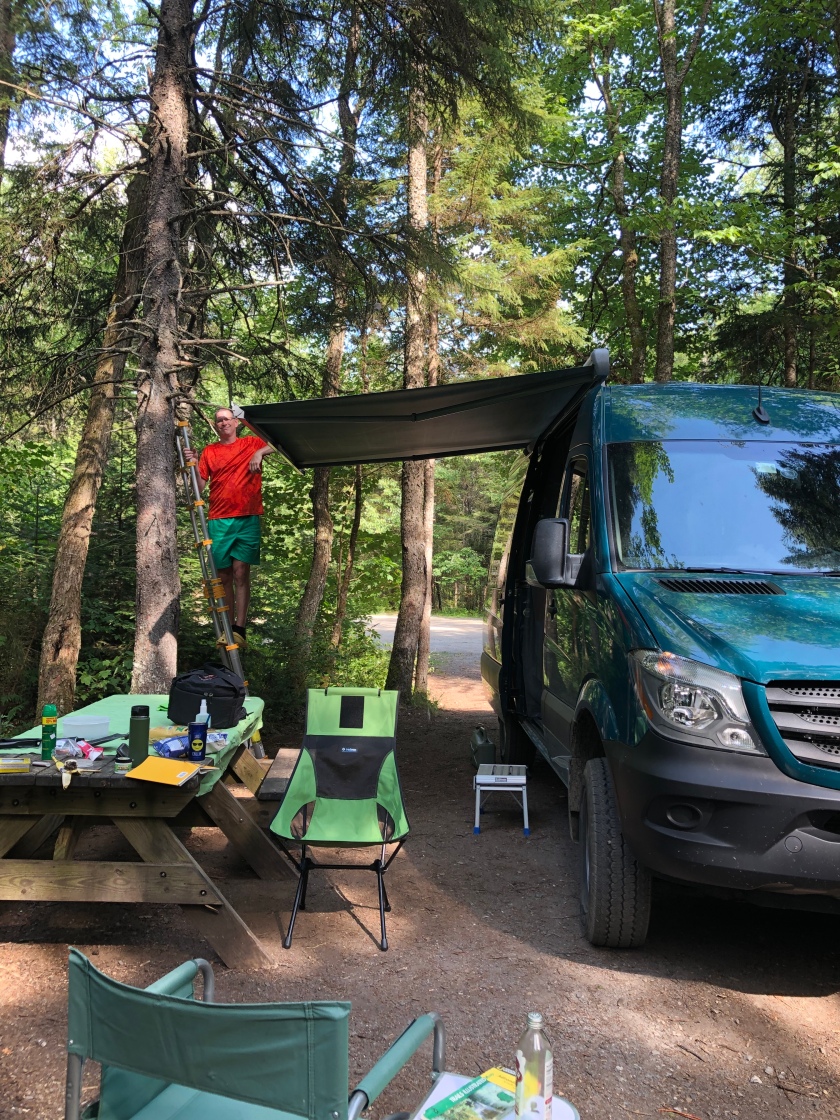 Our campsite was right next to Helldiver pond. We wanted to test out our new 2 man inflatable Kayak and the hike to the pond was only 2/10ths of a mile. We went out on the pond for the sunset. It was beautiful. We were hoping to see a moose but no luck. 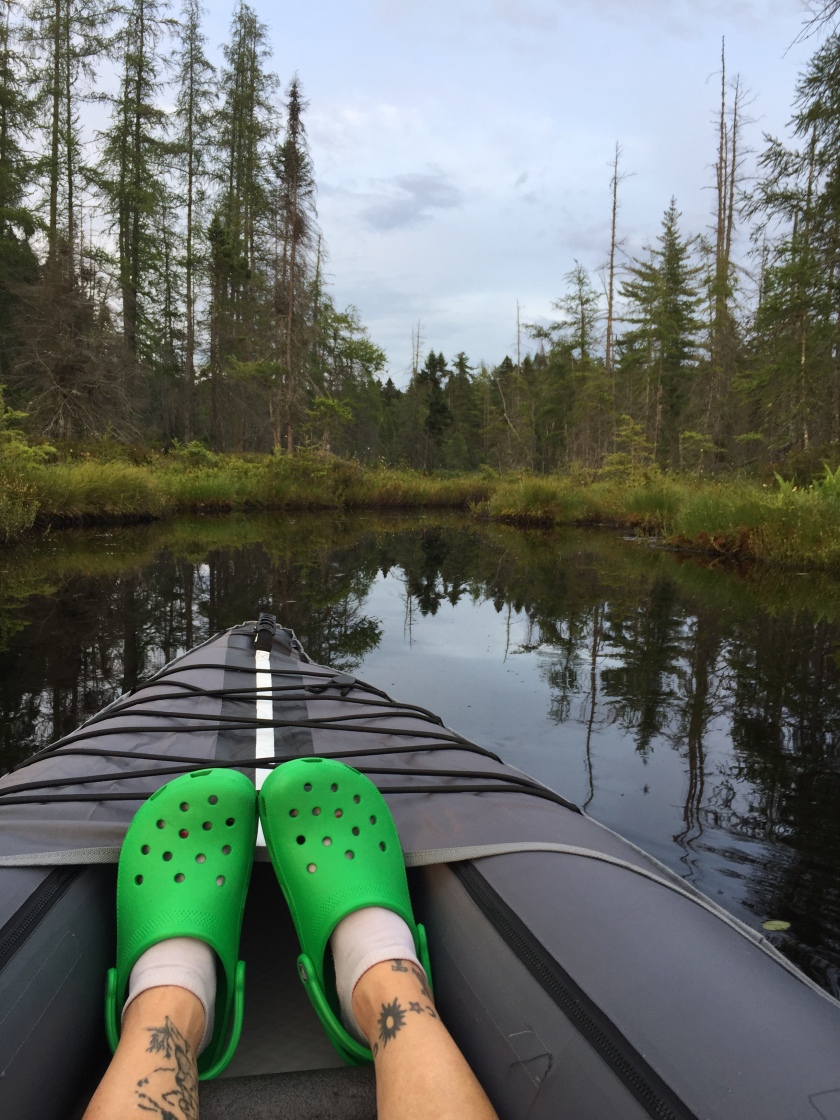 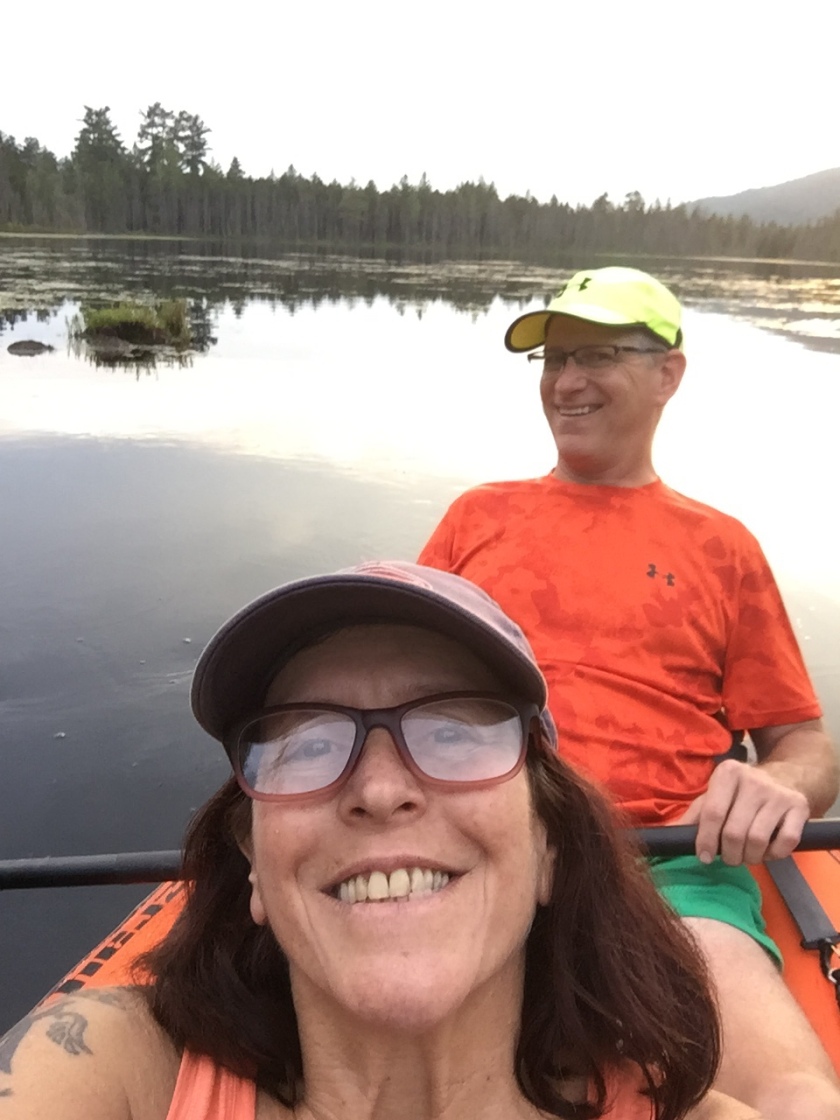 We had a nice fire that night and breakfast the next day and then we were on our way to the next camping spot.

Our second spot was Campsite Number 8, right on a creek with easy access to the water. 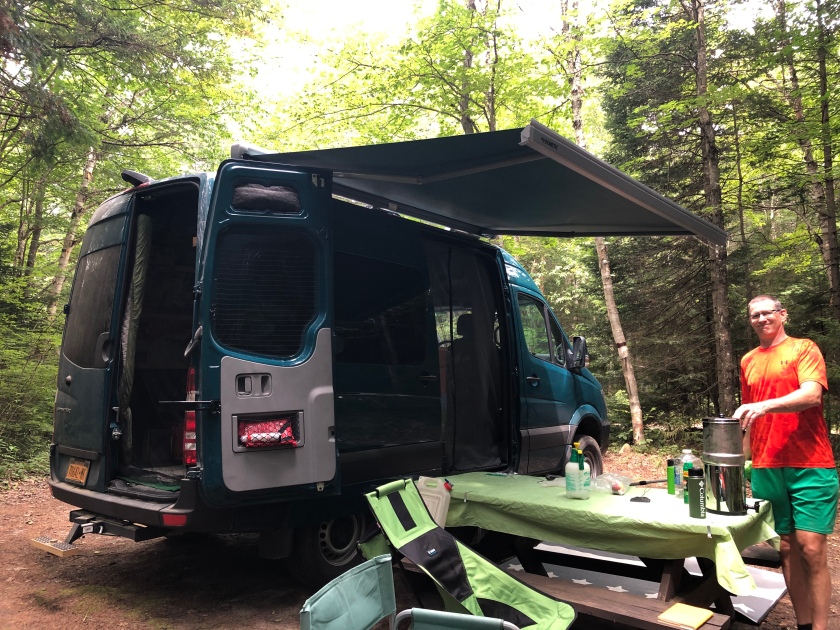 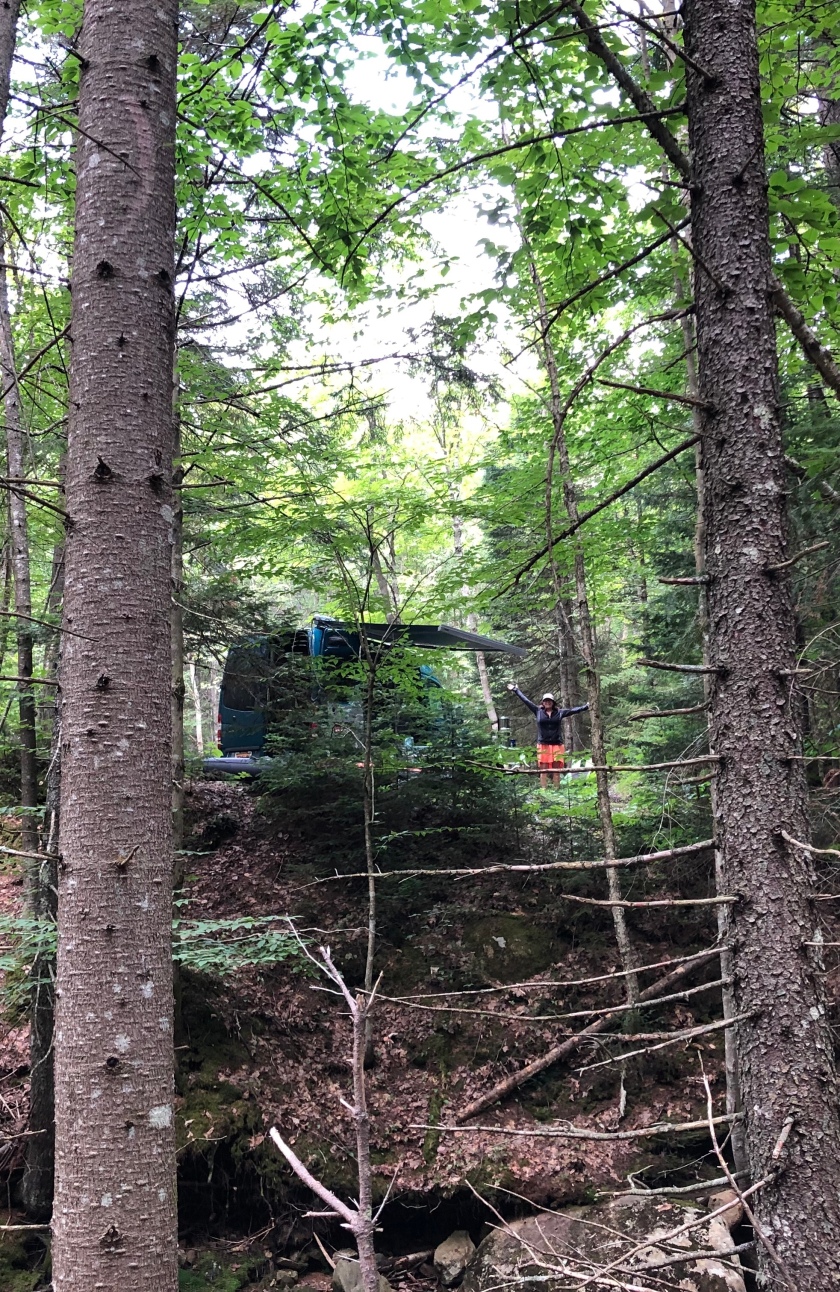 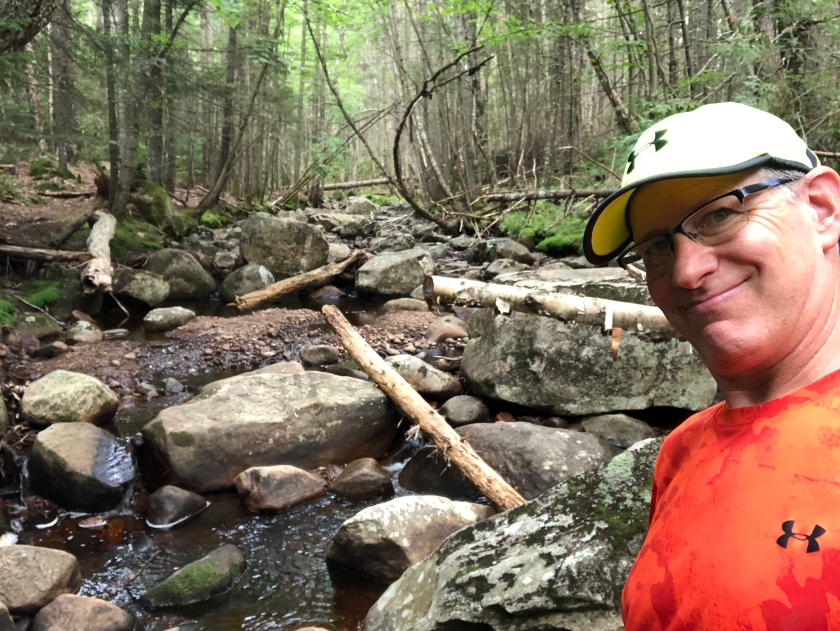 We gathered some rocks and built a few rock cairns on the fire pit and we had a nice campfire going, roasted some marshmallows. It was a great night. ….. until the rain came! And boy did it rain! It’s great having the new awning because we were able to stay outside and enjoy the outdoors instead of being locked up in the van. 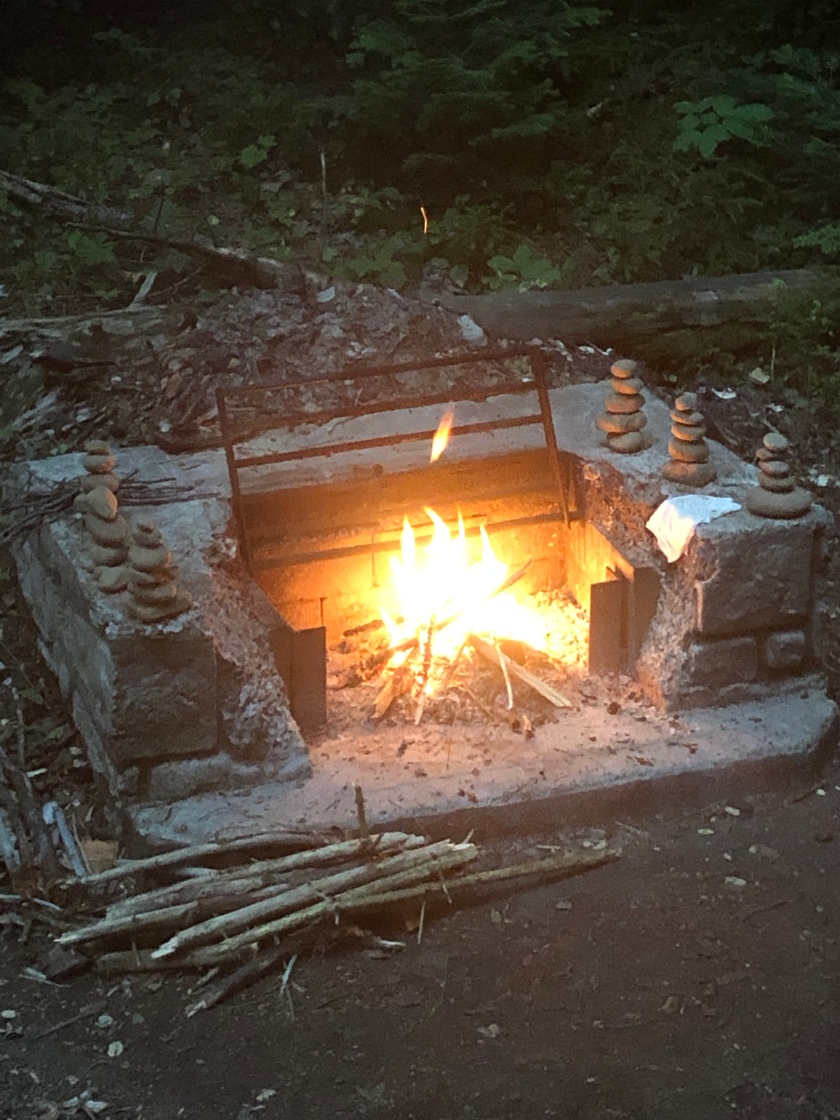 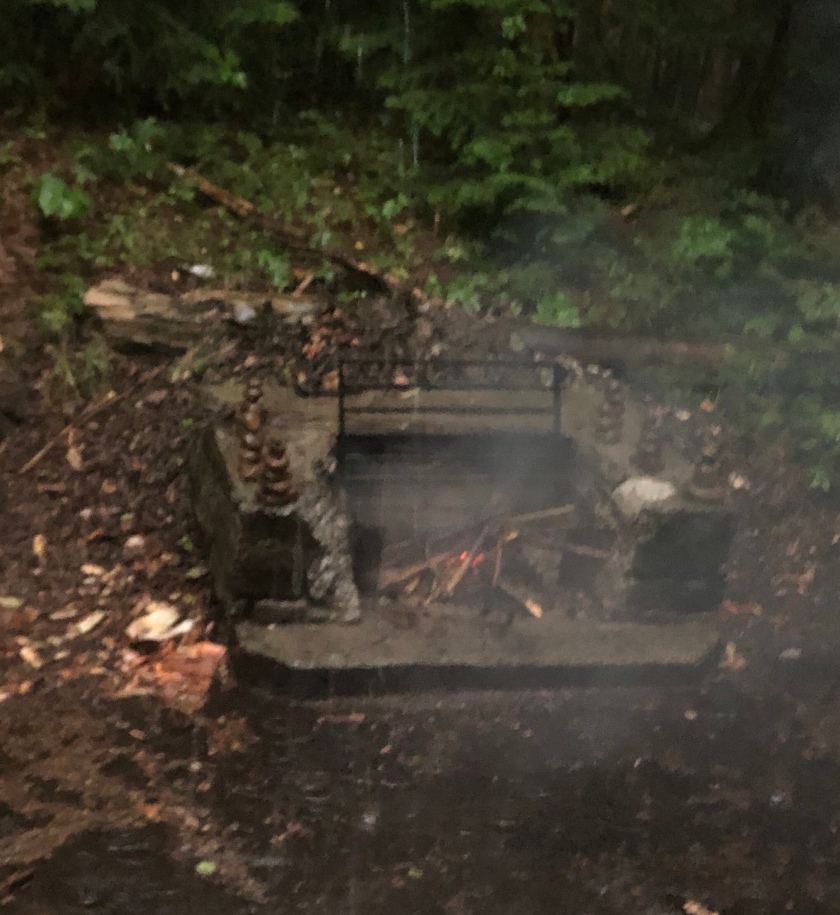 The next morning we packed up and headed to Cedar River Flow. We kayaked and camped here many years ago. We headed right to our spot in the hill, the same spot we stayed at the first time. We had breakfast and then set up camp and gathered some fire wood. While we were searching for wood, we came across a brand new outhouse built just for us. That was a great find!

Then we took a walk and came upon a whole nother set of sites right on the river!! We promptly went back, packed up the van and drove over to our new site. That’s another beautiful feature of this van, we can just pick up and go at any point and it’s not a big long process.

The site we are on now, site 6 has an amazing view with a little beach area. We also found and ice cold spring!! Crystal clear cold water for our Berkey Filter. If you know anything about Greg, he loves Springs, so this site just went up 3 notches on the perfect campsite scale 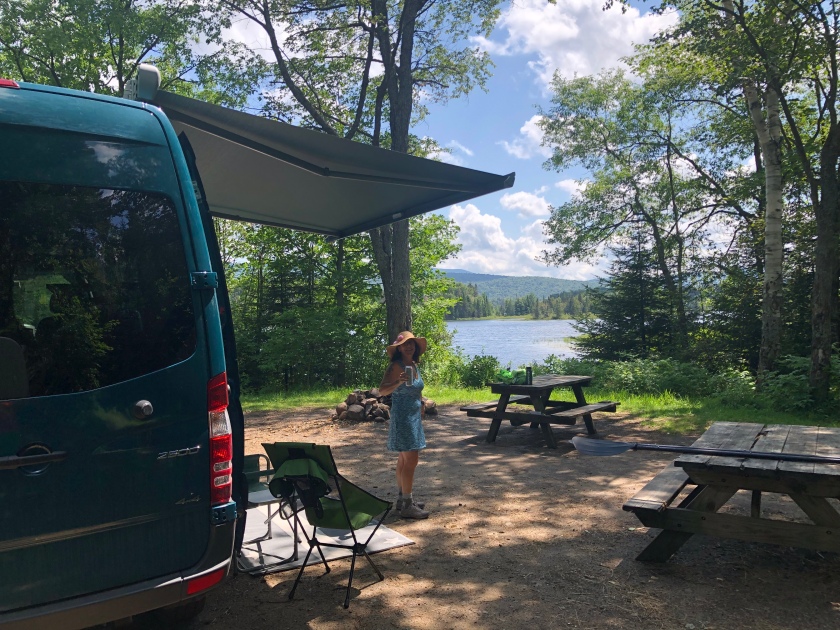 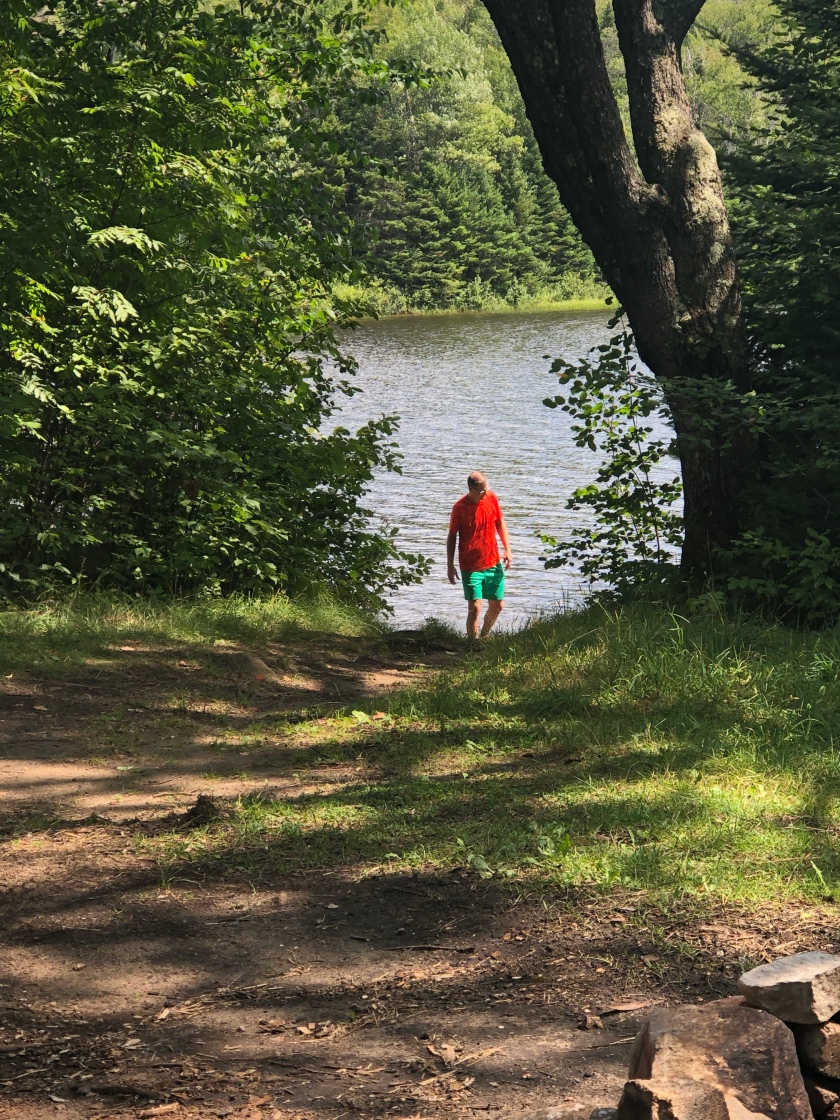 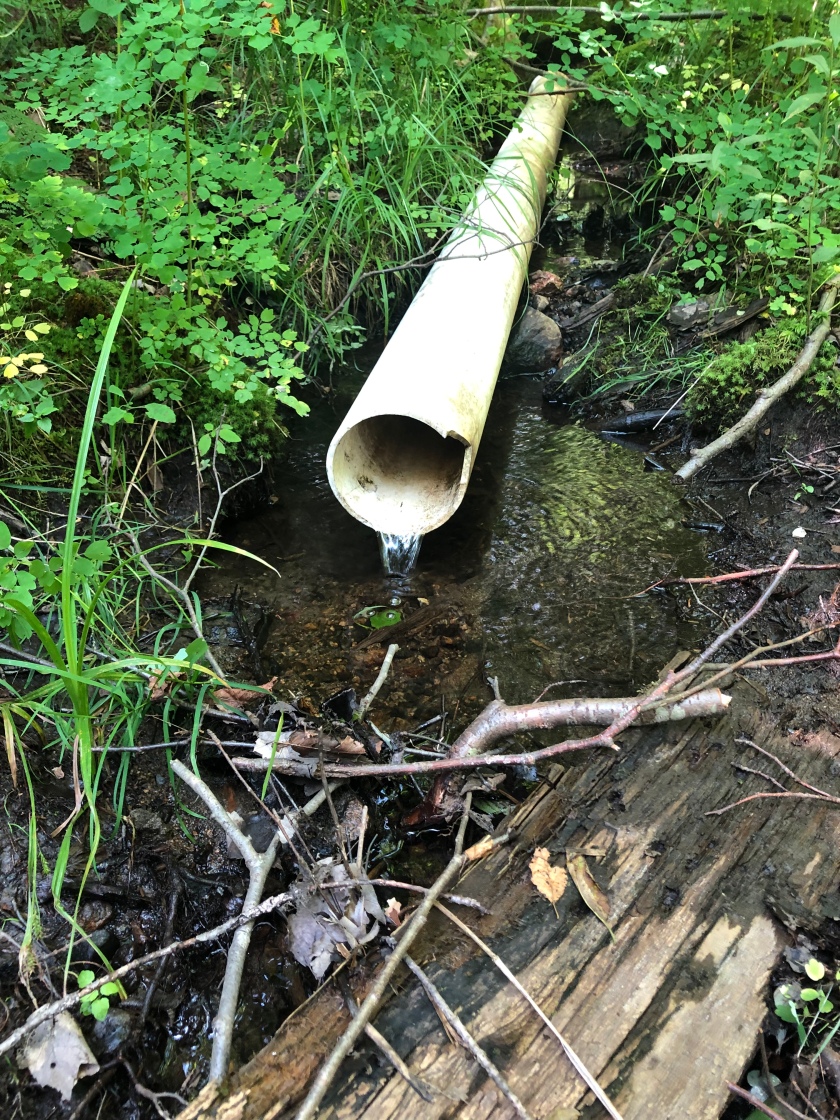 I was able to finally try out my new fly fishing pole. It’s a Tankara style Japanese pole. This thing is so lightweight and so portable. It’s perfect for the van. It took me a little while to get used to it. I kept getting the line caught in the trees or knotted around itself but once I got the hang of it, I was pulling in fish like crazy!!! I think I caught a total of 15 fish!!!! They were all under 3 inches, Hahahah, but it was still a good great time. 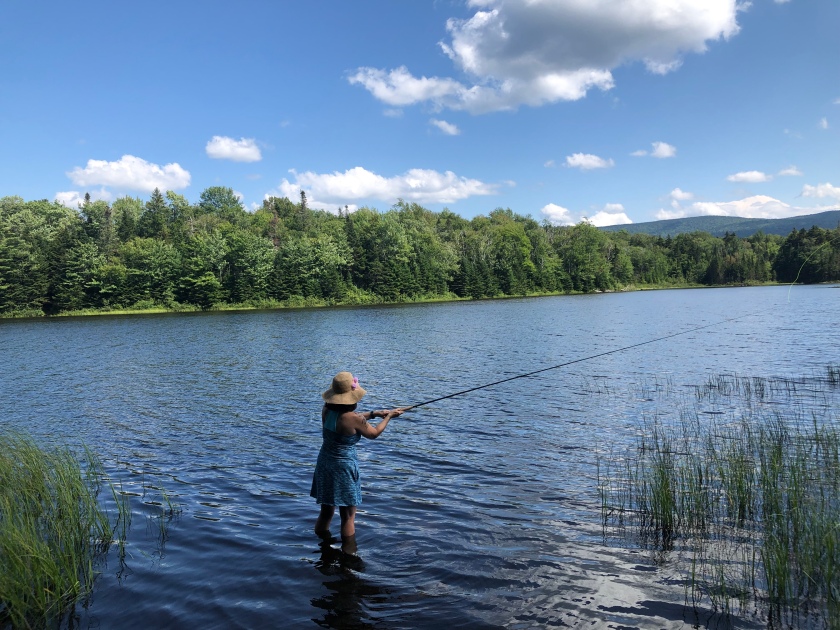 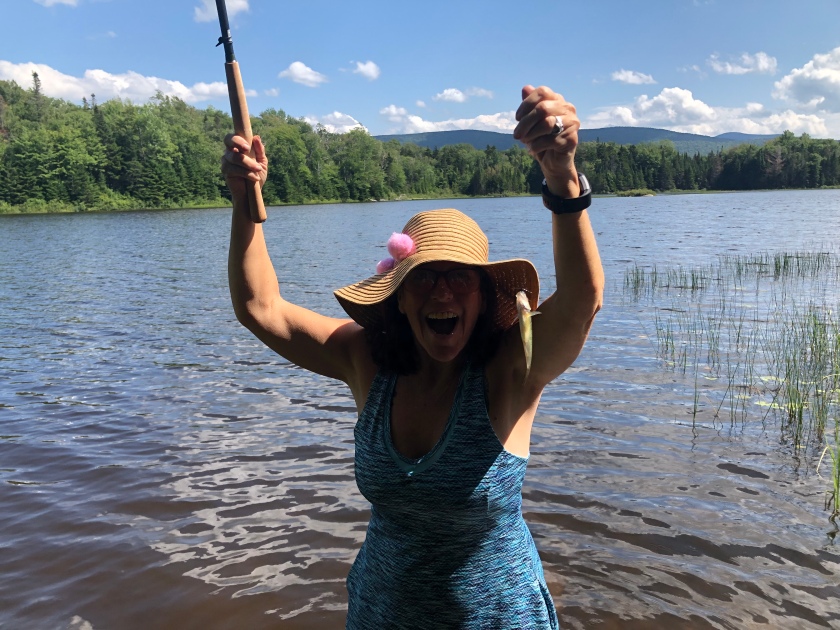 I was hoping to cook a fish for dinner, but no such luck so we had burgers and Mac and cheese instead. We had a nice fire and were hoping to take the kayak out for a nice sunset but it was super windy and cloudy so we decided against it. 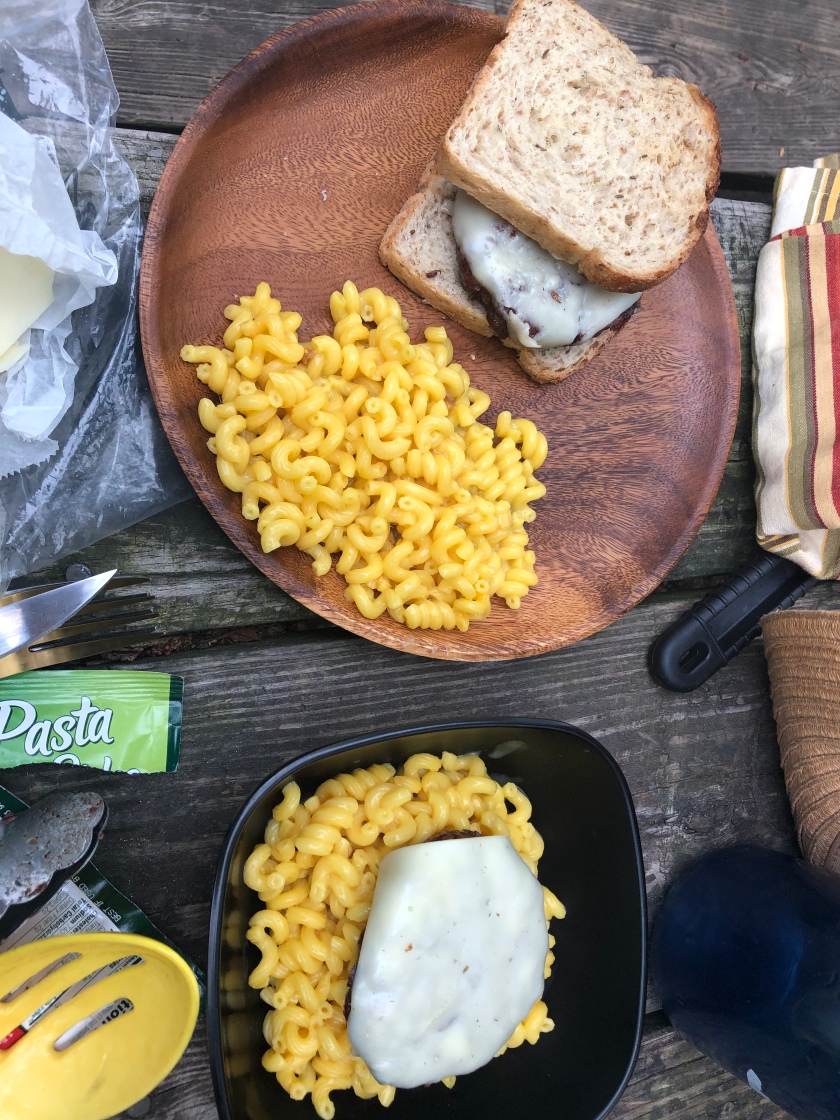 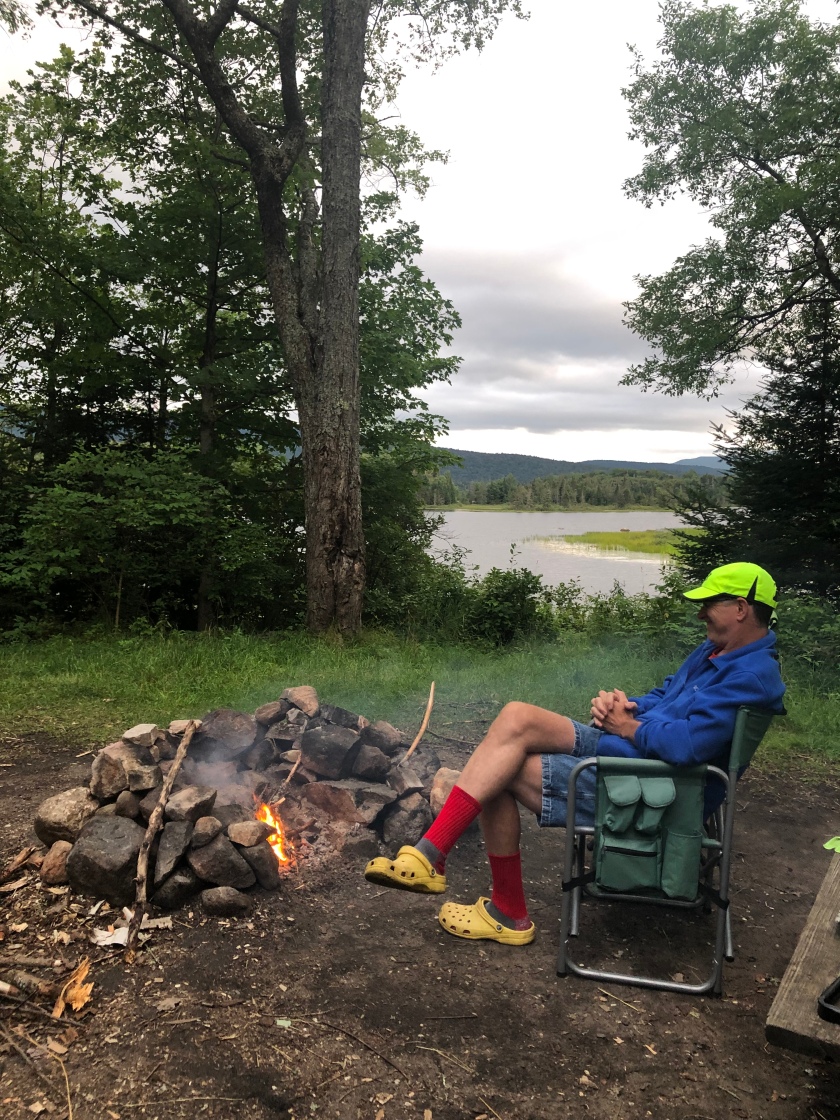 The loons were chatting it up most of the night. There’s nothing like falling asleep to the sound of loons in the distance. 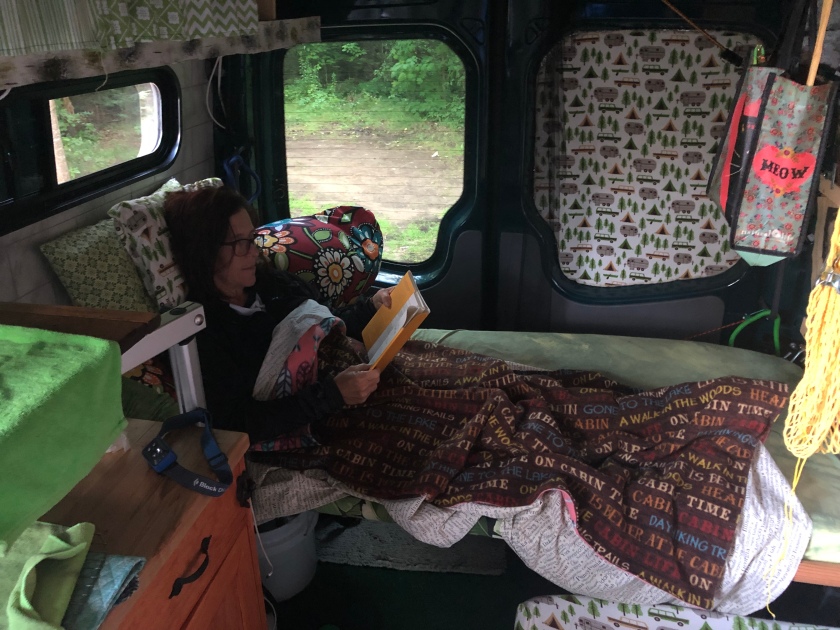 Woke up to a 57 degree morning. Made some coffee and got right back under the blankets. Greg is currently starting a morning fire and then we plan on going out with the Kayak for our last day out in the wilderness. We have some visitors coming today because tomorrow is Raquette Lakes big auction. One of my favorite days of the year!