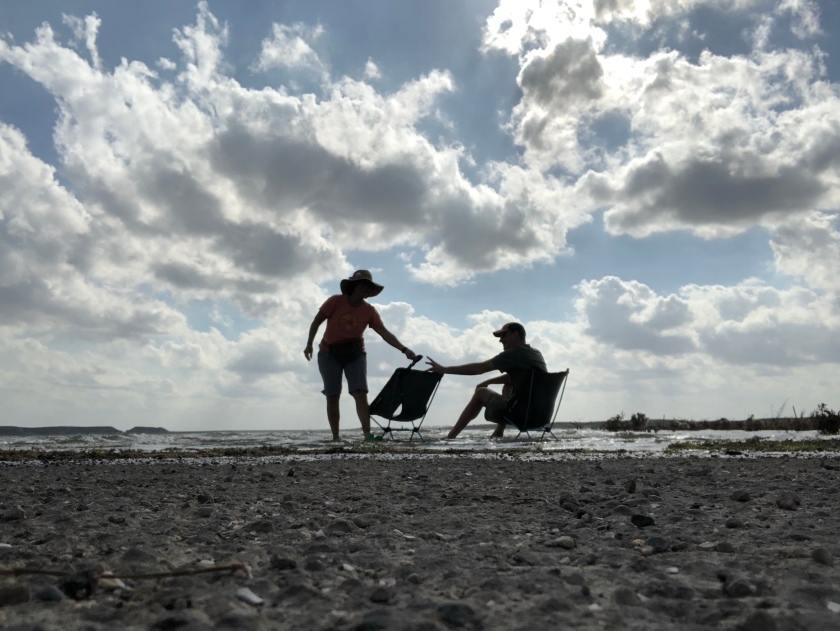 Well we spent one more night at Payne Lake. Woke up to some beautiful dew especially on the spider webs. We took the Kayak out for one last spin and then heated some water for showers and also decided to wash and wax the van since no one was in the campground anymore.

We headed out towards Houston but noticed the GOS was taking us on tolled roads with no toll booths. Not good!! They don’t accept EZ pass and if you don’t have the Texas tag, then they mail you a fine. This is not good for people like us who won’t get that fine in the mail until it’s way overdue. So thankfully Greg found an option on the GPS to avoid toll roads. This option took us almost through the city of Houston on some major traffic areas. Not exactly what we had in mind. The good thing though is when you travel on these type of roads, the food options are endless. However, we came to find out that certain parts of Texas do not allow you to go indoors to order or eat and our van is too tall for the drive thru. There just so happened to be a Little Ceasars on the route and we LOVE pizza.

We made it to another Passport America spot. A very fancy RV park with a Texas shaped swimming pool. The only spot that was available was in a construction zone but we took it anyway since it was half-price and the amenities in this place were unbelievable. We did our laundry we walked to a roadhouse grill and we had a great time at this RV park. They even had a clubhouse with a gym.

We checked out at noon, wanted to stay here till the very last minute. The showers alone would make this place a 5 star place!! Plus we knew we were heading back into the National Forest for awhile so it was nice to get a little sun for us and the vans solar panels.

Our next stop was a hunters camp. First we loaded up on groceries at the Market Basket and the Dollar General, then we headed into the forest and found a spot at a hunters camp. It’s basically a small area in the woods, off the side of the road where hunters park overnight so that they can get an early start.

Not much to do at the hunters camp so we left Bright and early and headed down the road. Around 10 minutes later we arrived at another camping spot which is also in the national forest. The next spot was like a county park. There were a couple of hammock campers there who meet up every year at this time for a campout. We made sliders for dinner and some Cajun Ranchero beans. The beans were the consistency of spackling paste. But we ate them anyway. These last two camping spots had no water so dishwashing is interesting when you are conserving water.

Being that we were low on water and also that it’s a Friday, we decided to leave early and find a spot at a campground down the road that have water and hot showers. Wanted to get a spot before the weekenders come piling in. We were surprised at how full the campground was, but we got a nice spot on the lake. We put on our neon colored hunting gear and took a short hike in search of an artisan well that we saw on a map that was down the road. We never did find the well but we did find a bridge under construction LOL.

The next day we headed towards Bastrop, Texas to meet up with Scott and Christine for some lunch. Scott is a friend of Greg’s that he worked on the Cruise Ships with. We meet up with them every seven years or so.

We decided to check out another Harvest Host setting for the night. This one was an Olive Farm where they make their own Olive Oil. Scott and Christine decided to come with us and the owners of the farm gave us a little tour and we had a sampling of the Olive Oil. It was amazing. Scott and Christine purchased some along with some seasoning packets. Greg and I had a nice night at the Olive Farm even though the temperatures got down into the low 30’s.

The next morning we made an executive decision to drive 3 hours south towards the ocean for some warmer temps and some different scenery. Each day we check the weather map to make sure we are OUT OF THE BLUE.

There were probably 15 RV parks to choose from down there by the Gulf, so we just decided on one that had good google reviews and a nice Hot Tub. It was called Circle W RV Ranch and it was great. Super friendly people. They were so welcoming. And it was a very big RV park, with mostly everyone long term, like winter snow birds that come down for the entire season. The weather was perfect for the hot tub and the showers were my favorite so far. I know I mention showers a lot, but when you live in a van, a good shower is like hitting the lottery!! I wish I would have taken a picture of this shower but I didn’t. When we got to our spot and plugged in the van, we had a little friend greeting us.

The next morning, we went in the Hot Tub again and took another shower. We were in no rush to leave this place. We left around lunch time and drove down by the water to have some lunch.

From there we continued on our three hour drive to a town called Encinal. Our plan was to stay at this fish hatchery RV park and do some fishing there. When we pulled in. We got a bad vibe. There were a bunch of full time RVers that looked like they had been there since Jimmy Carter was president. We found the office, where you would normally check in. This office was dodgy and was being protected by a viscous guard dog that was NOT tied up. I EXTREMELY QUICKLY got back into the van while Greg had more of a calming slow approach to this situation. The whole time, I’m yelling, “Get in the van, Get in the van!!!” And Greg is like “Hello… what a good boy.” As he is slowly backing away from Cujo.Well he managed to not get bit by the dog and we left there as soon as we could.

There were really no other options so we just decided to stay at the Pilot Travel Center for the night and got an early start the next morning.

Up early the next day to find our new home in The Amistad National Recreation Area outside of Del Rio Texas. We found a great spot in the Governor’s Landing Campground which had about 15 sites with canopies and picnic tables. It’s WINDY in Western Texas and the wind does not keep the flies away. Our site was definitely a hot spot for every fly in Texas. I do enjoy a good fly hunt and probably killed almost a hundred of those little bastards.

This spot we stayed at had a nice little hike down to the water underneath the bridge. Must be great in the summer heat of Texas. The temps get pretty cold at night and in the morning but then heat up to the high 70’s during the day. That’s why in some pictures you see us with our winter coats on and in others we are wearing shorts.

We stayed two nights this spot and even had time for a day spa foot treatment.

We decided to stay in this area for a few more days and drove to the other side of the reservoir, about a half an hour drive to a more primitive campground. This one had no water and was only $3 bucks a night as compared to $5 dollars a night for the place we stayed with the water. This new campground had about 6 spots but also had a primitive area for free. We drove down there to check it out but then agreed on paying the three bucks for the picnic table and canopy.

We broke out the bikes to do some exploring. There’s A road that goes right down to the water. I mean literally goes into the water. There’s thousands of ducks down there. Great views and nice breeze.

Went on a hike later that evening. Found a deer hoof. Can’t say I’ve ever found that before.

The next morning we explored the other direction and came across a secluded camping spot so we packed up the van and switched spots.

Later in the day we biked back to the water with our small backpacking chairs and sat right in the water where it comes up onto the road. Lots of fisherman out on the water. I should have bikes back to the van to get my pole. Oh well

Tomorrow we may or may not leave this area. We might head another half hour away to some canyons that were recommended by a couple we met yesterday. It’s great to travel with no plans. See “y’all” in another two weeks. I think posting the blog every two weeks is a do-able thing. For now atleast.