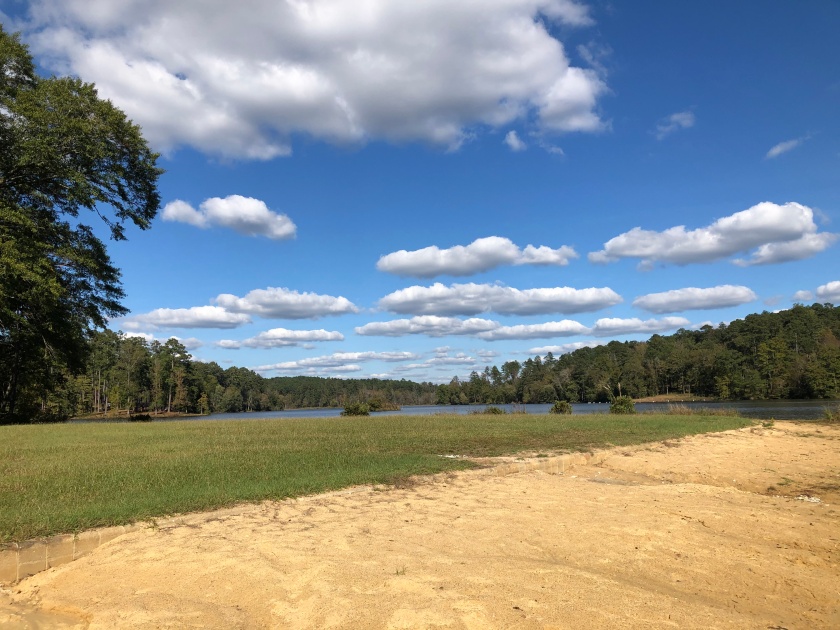 We check the weather constantly and even more so when there is a known hurricane coming our way. We saw two full days of rain and wind coming so we hunkered down in the town of Chattanooga in a 24 hour paid parking lot. We figured if we are gonna be stuck in the rain at least we could find shops or coffee shops to kill some time, plus we wanted to be away from any trees that had the potential of falling on us and the van. This paid lot was perfect.

In between rain storms we explored the city of Chattanooga, heading all over, even across the walking bridge a few times. We are still a little uneasy about leaving the van for long periods of time. THE CLUB helps alleviate that a little.

Finally after the hurricane passed through, we were able to hit the road again and head towards Alabama. We found this awesome waterfall along the way and it was really full and spectacular.

Our next stop was a private campground. we needed electric and we needed showers so we found a place from our passport America membership which was along the way. We arrived at the Cherokee RV campground resort and made our way through the Sanford and Son Junkyard entryway to get to the office where we stood for awhile waiting for someone to come out. A large fellow came in finally and asked us if we rang the doorbell. We hadn’t seen a doorbell, he told us it’s outside the door where we proceeded to go outside and ring it. Then his mother appeared and the two of them began to interview us about the van and whether we would be accepted into this fine establishment for the night. It really was quite bizarre considering this place is probably the worst kept place we have seen in a while. Well they finally after much persuasion decided that we could spend the night in Billy’s spot cause Billy’s camper was in the shop and he probably wouldn’t mind.  We followed the mom to Billy’s Spot which was as basic as could possibly be. Not even a picnic table, or fire ring. And on top of that it was a pretty small spot with really old campers on either side. We were pretty afraid of even plugging in our electric as during the interview process they told us that vans like ours are not covered by their insurance because of an electrical fire that happened in the past before they took over this luxurious campground.   Billy’s spot is by the bath house which has ONE TOILET for over 100 campers. I’m telling you this is just bizarre!!! They also handed us a sheet of over 50 rules which includes them asking us to leave if they want us to leave.  Let’s talk about the showers…… they were checkerboard shower curtains, but every other square was clear. Really! You can see through the shower curtain which separated the shower stalls from one another.  I still took a shower anyway, but I took it at 6 o’clock in the morning. Not a creature was stirring.

We got out of there by 8 am and headed to our next spot which was quite the opposite. But first we stopped at the Piggly Wiggly which is a grocery store down here. We’ve heard about the Piggly Wiggly. I used to think it was like a 7/11 but it’s a full Grocery Store.

After that we went on a search for some Diesel for the van and then headed into the National Forest to spend some time at a National Recreational area called Payne Lake. This place is AMAZING!! There’s like 50 sites here. We got a beautiful sight right on the lake for SIX BUCKS  a night. There’s running water, hot showers, flush toilets, picnic table, fire ring all for six bucks. That disaster of a campground we stayed at last night was seventeen dollars. This place is like a dream! The camp host and his dog came over to introduce himself. Then a few hours later a law enforcement officer came by and asked us a bunch of questions. They definitely keep an eye on the park. It’s well maintained and just a super beautiful spot. We got a nice fire going and roasted a pork shoulder in the dutch oven pot on the fire. It came out great. Had it with salad one night and then pork quesadillas the next day for lunch.

We were planning on just staying a couple of days here but this place is just so beautiful and the weather is good right now so we decided to stay another 2 nights. As long as we have enough food than there really is no need to leave. we switched spots to an electric spot. Plugged in the van and recharged the batteries to full capacity and charged up everything else we own that has a battery. We took a few nice hikes and some bike rides to explore this area. It didn’t disappoint. However, Gregs knee has really been bothering him so we are not able to go very far.

The full moon here over the lake is so cool!! And on top of that the coyotes howl at it every night when it first starts to rise. I wish I could have captured their yelping on video but they were too far away.

November 3, 2020 Headed out of Payne Lake this morning. Headed toward Mississippi. We found a bunch of Casino’s on the Mississippi River in a town called Vicksburg. The first Casino parking lot was a little shady so we moved onto he next Casino, which I think was called the Riverview where we had their blue plate special for dinner. It was amazing southern cooking all for 10 bucks. We both broke even on a little bit of gambling plus we got to “camp” for free in their lot so that’s a win. The Mississippi River is pretty cool with the barges that go by. This one tugboat was pushing 28 barges. Thats crazy!!

The day turns out to be beautiful. 75 degrees. we had been having issues with the weather the past few day. It was getting into the 30’s at night which is way to cold for us. Not so much at night when we are tucked away into our zero degree bags but in the morning, its miserable to get up and moving. So searching for those warmer nights by steadily heading down south.

We are currently across the Mississippi River in Louisiana at and RV park looking over the River. We took the Nachez Trace Parkway here which was sooooo amazing. I highly recommend it. We were planning on going back into the National Forest for tonight but then we found this place at a 50% discount with our Passport America Pass. (Thank you North Ridge friends) This place is pretty fancy. Pool, Hot Tub and every amenity you can think of. We desperately need to do laundry as well. I made that pork roast and then made quesadillas the next day. I swear, everything I own smells like a pork quesadilla. and we still have more leftover for tonights dinner. I’ll be glad to get it out of the fridge. Every time we open the fridge, it smells like bologna.

Check out at the campground was 11 AM so off we went for another 3 Hour Drive. We headed towards Texas and were looking to stop at Sabine National Forest where they have dispersed camping. We plan on doing a lot of camping in these national forest type of places but we don’t have that much experience with it except for what we’ve watched on YouTube. So we travel down a dirt road for a few miles and when we got to the turn off to what we thought would be the camping area there was a gate across it saying it was closed so we continued on in search of a pull off or something along the way that we could park at and camp for the night but we did not have any luck. We Managed our way back into the town and stopped and decided to look into a different place which was in the same national forest but a little bit further south called Indian Mounds recreation area this has four camping loops three of the camping loops were closed but one was open and we got super lucky to get a beautiful spot right by the water over looking Louisiana on the other side. So now here we are in Texas at this beautiful spot and there’s no charge for camping here it’s completely free with a 28 day limit.

Our first night here was fantastic there was a guy across the way who ran his generator for most of the night but it was far enough away that it wasn’t that bad and we were joking around about well at least he’s not next-door to us that has to be the worst if he was right next-door to us and then the next day a camper pulls up and we see the guy unload a great big generator. On top of that he pulls out a leaf blower and starts leaf blowing his site for a good 20 minutes. We had never seen this before. We are in the middle of a national forest in Texas it’s kind of a pine forest so there aren’t even really any leaves on the ground and this guy is leaf blowing his entire campsite it was just crazy. That night we had the two generators going one across the campground and one right next-door. We had a nice fire going and we’re trying our best to block out the noise of the generators when we saw these two beautiful bald eagles flying right into our campsite and up on the tree right in front of us. We tried to get up quick to get a picture for you guys to see them but as we made our way around the tree, they flew off. So majestic!! As they fly off, two otters swim in to the small cove to our left. So cute.

Decided to blow up our two man Kayak and spend some time away from the Generator.

Today is Sunday, November 8th and all the weekend campers have left. We have enough food for maybe 1 or two more nights. Its so nice here and now that the generator guy left, its just so peaceful. We have seen bald eagles three or four times a day. They must have a nest nearby.After this we will probably head to Houston Area and maybe Galveston again. It would be nice to spend a little more time down there. I guess we’ll see where the road takes us next.