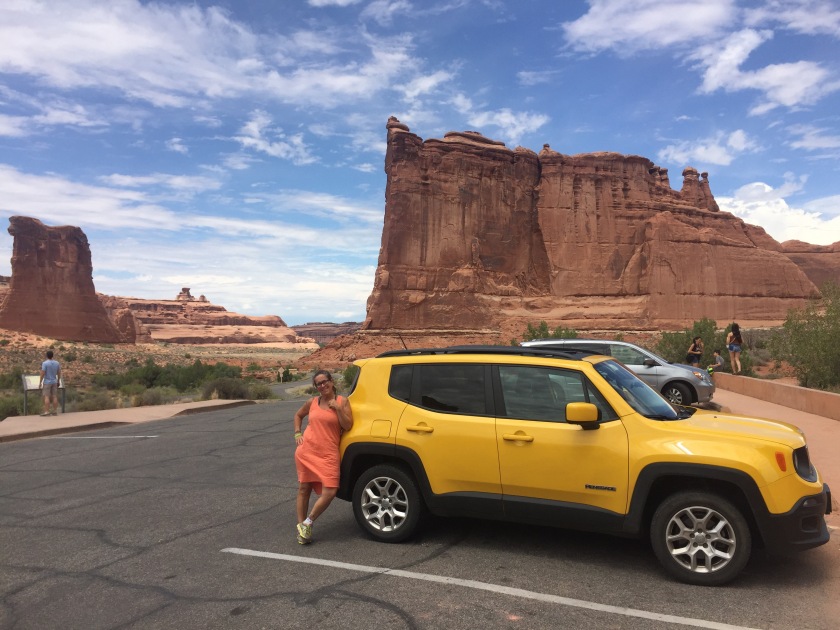 We were planning on leaving the Dixie National Forest spot today, but last night it started raining at like 6 pm, it rained all night and all morning, so we laid out another 17 bucks and decided to stay another night. We didn’t want to take the bee down these mountainous roads in the rain and we also didn’t want to pack up everything wet. So we headed into town to buy a few things and have some lunch and to get a cell signal and the wifi for a few hours. We also wanted to buy a mouse trap because for the last 2 nights we have heard a mouse scratching around in the kitchen portion of the Bumble bee.

We also have a family of chipmunks at our campsite that couldn’t care less about humans or mouse traps.

So we had a nice lunch at a place called Kenny Rays and checked out the town of Panguich. Finally it stopped raining and we came back to the campground and took a little hike. The altitude here really kicks our butt. It’s almost impossible to hike for more than 15 minutes without getting out of breath. 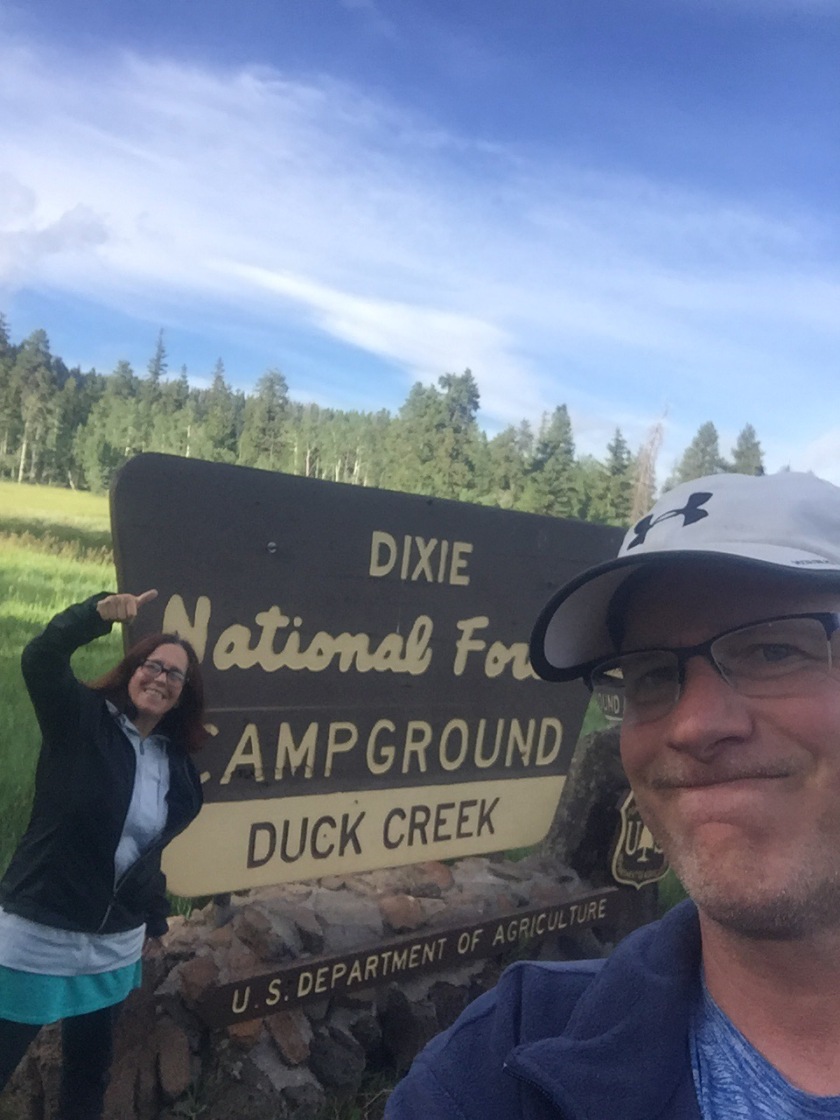 Greg also wanted to buy a hummingbird feeder as there are tons of hummingbirds in this area. 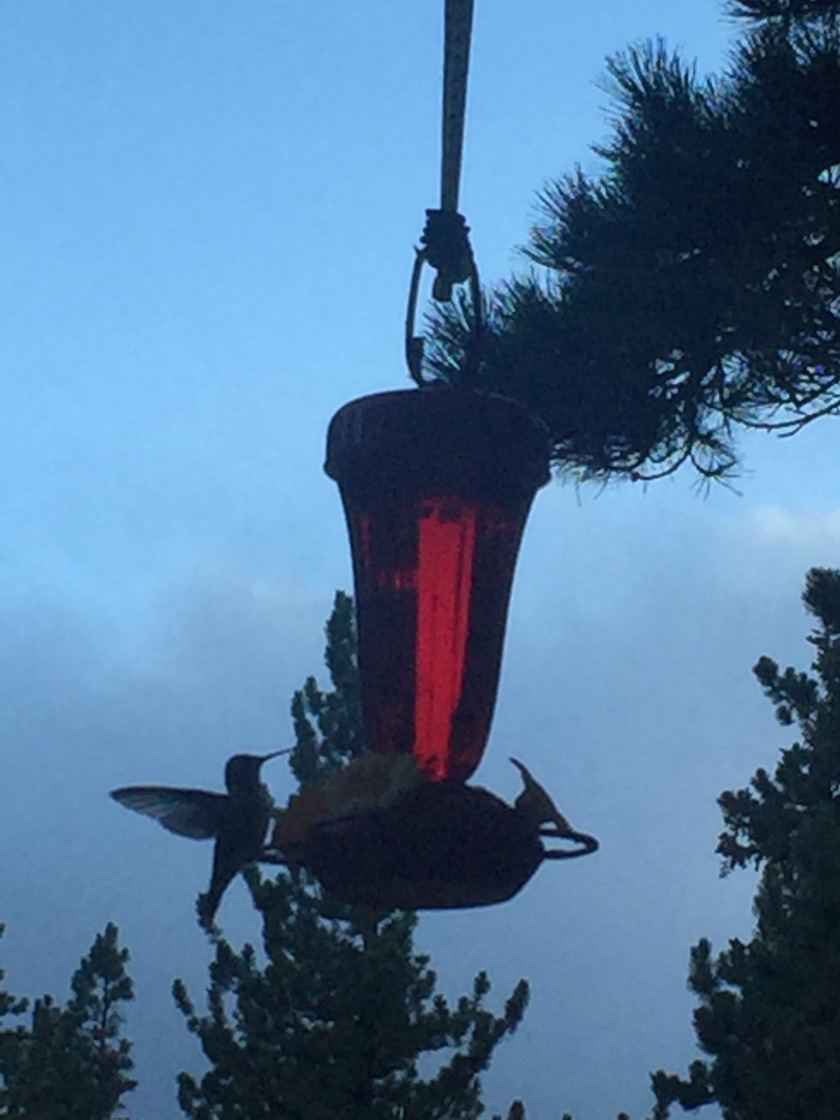 We set up the mouse trap and went to bed. Immediately, I heard a scuffling and then a snap. He was trapped. Greg took the mouse for a little drive, came back and set up the trap again and snap, we got another one. Back in the car for another drive.

We packed up in the morning and headed toward Grand Staircase Escalante National Monument. Heading towards some very ominous looking black clouds. The sheer rock cliffs in this area are white. It’s amazing! If you have never driven route 12, in Utah, plan on doing it at some point. It’s call the all American road and it is just breathtaking!! 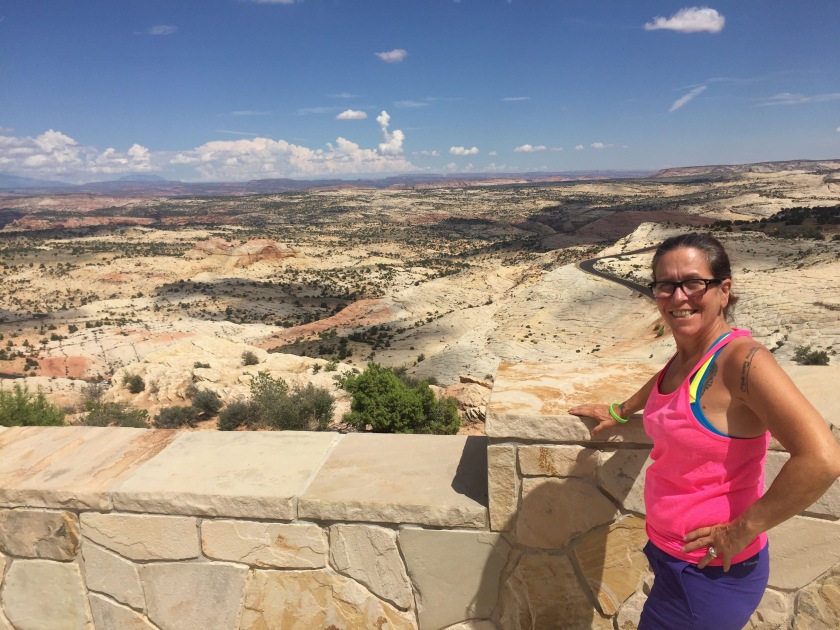 We headed to the campground at the little falls trailhead area at calf creek falls recreation area. This was the most amazing campground ever and we were lucky enough to have a choice of 3 of the best sites in the campground. We back up the bee into site 12 and take out the map and BOOM!!!!! Lightning strikes!!! Literally the loudest sound ever and it strikes the rocks 20 feet away from us. IT WAS SO SCARY!!!! There was no way in hell I was staying down in that canyon with a lightning storm above us. So off we went. The rain picked up as we headed up the mountain so we stopped for some lunch in a town called Boulder and had some coffee next door in an art gallery. When the rain finally passed, we drove on and set up camp in another National Forest Campground called Pleasnat Creek. It’s just us and one other couple camping. Altitude is 8500 feet. We have been staying at high elevations. Drops down to the mid 40’s at night. Brrrr. 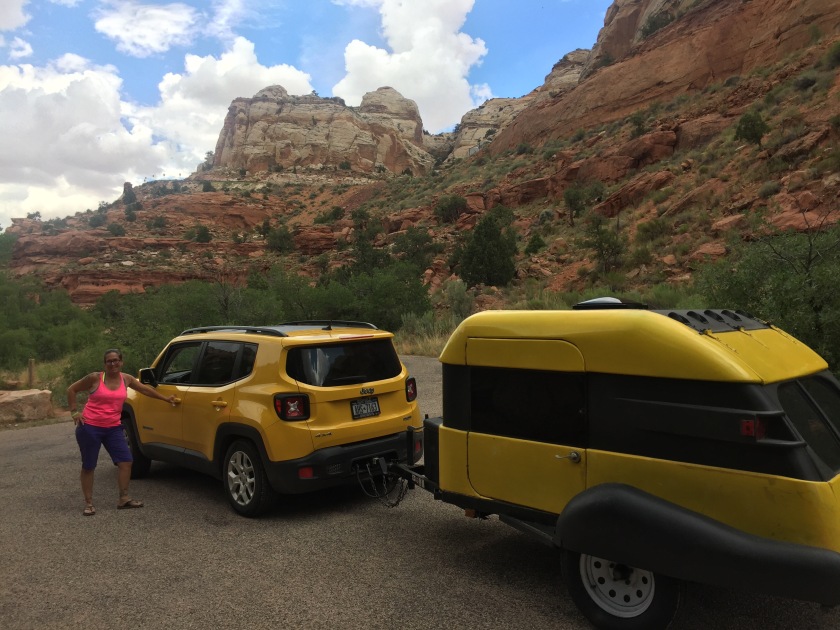 This place is loaded with Ponderosa pine. And incase you have never smelled the trunk of a Ponderosa Pine, you really should, cause it smells like Butterscotch!! It’s amazing!! 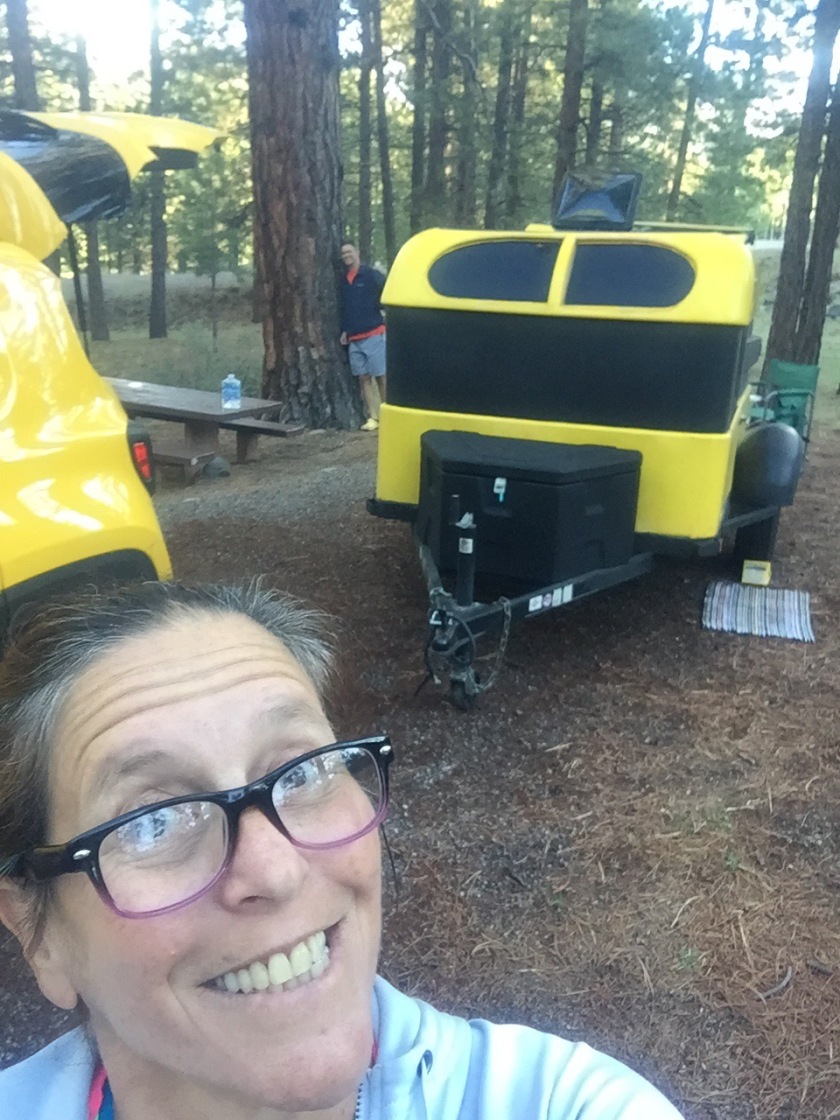 The sleeping in the high altitudes has been great. Today, however we head back to the desert. We passed through Capitol Reef National Park on our way to Goblin Valley State Park by Green River Utah. The colors of the rocks are just so amazing in this area.

We were considering spending the night at the Goblin Campground but it literally was in the middle of no where and plus Moab was calling my name!! So we continued another hour and a half to Moab where we were extremely lucky to get the last spot in the BLM Campground at Goose Island just outside of Arches National Park. We paid for the next 3 nights to stay here. Camping spaces in the Moab area especially on a weekend are not easy to come by. Especially ones right on the Colorado River

We Heard about the construction at Arches National Park, but we took a chance and headed that way anyway.  The entrance going into the park is so majestic.  The rocks are bigger than anything you can imagine!!  I love this park!!

We decided to have some lunch at the Balancing rock and then were planning on looking at the delicate arch, but the road was closed from flooding.

Its hot here.  Trying to keep cool by eating ice cream, swimming, library’s, and other assorted air conditioned venues.  Its hot, but so worth it.  We are staying 2 more nights.  The sleeping is hot, sticky and awful, but its still better than not being here. I LOVE UTAH!!