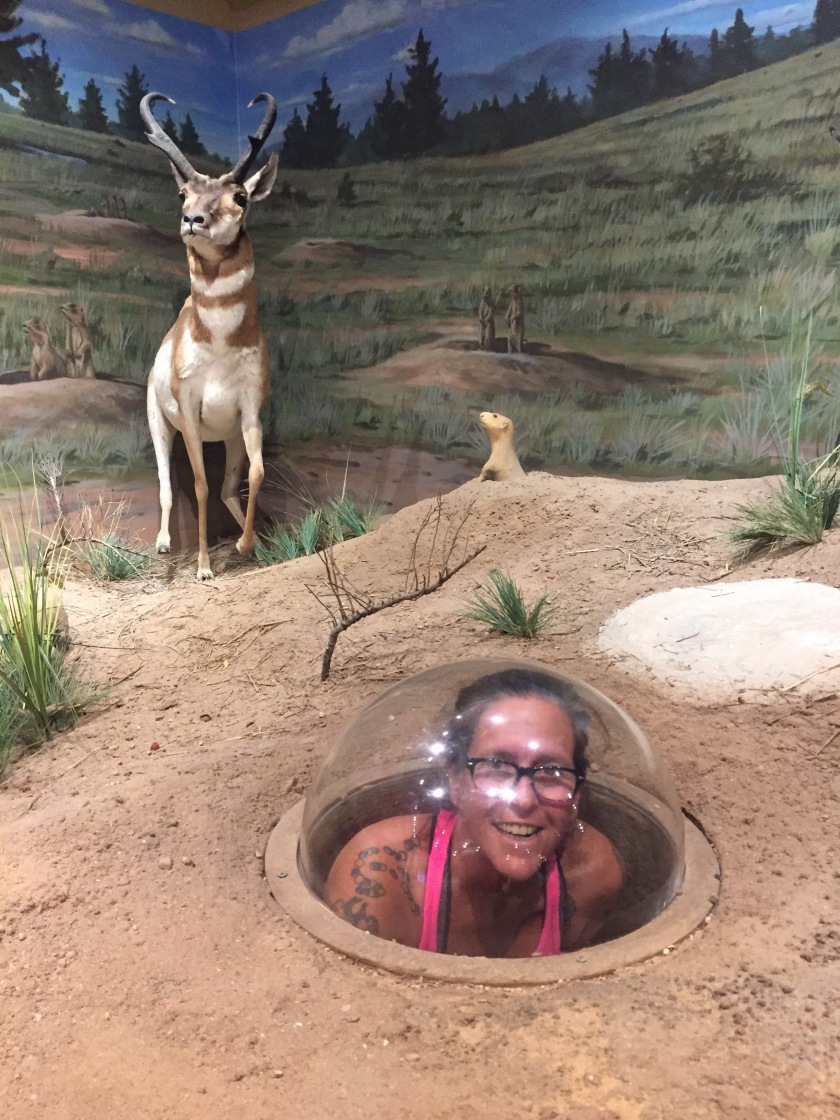 This morning we decided to take a “short cut,” up and over a mountain instead of going around the mountain. After all, we do have a jeep and we left the bee at the dispersed camping site. I’d say about 10 minutes into it, the road turned to dirt and became very winding with huge elevation jumps. We were so high up that the potato chip bag exploded!!

The drive was beautiful and terrifying at the same time. We did FINALLY get down the mountain and had a nice drive to Bryce National Park.

I could not believe how many people were there!! I’m so happy that I was able to see this park years ago before all the over crowding. We stayed for a short time and had to get away from all those people!!

Instead we decided to head down the road to Red Canyon and take a hike there. It was a great hike, with great views and the best part was that we were the only ones on the trail 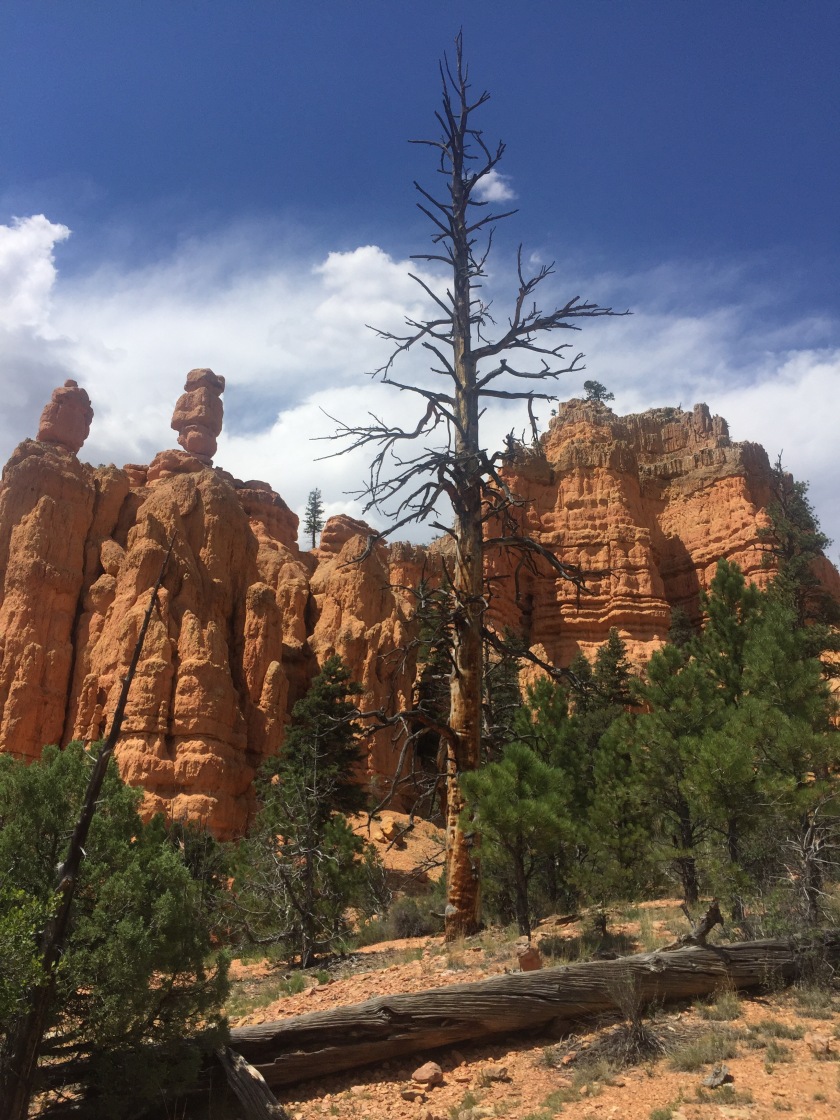 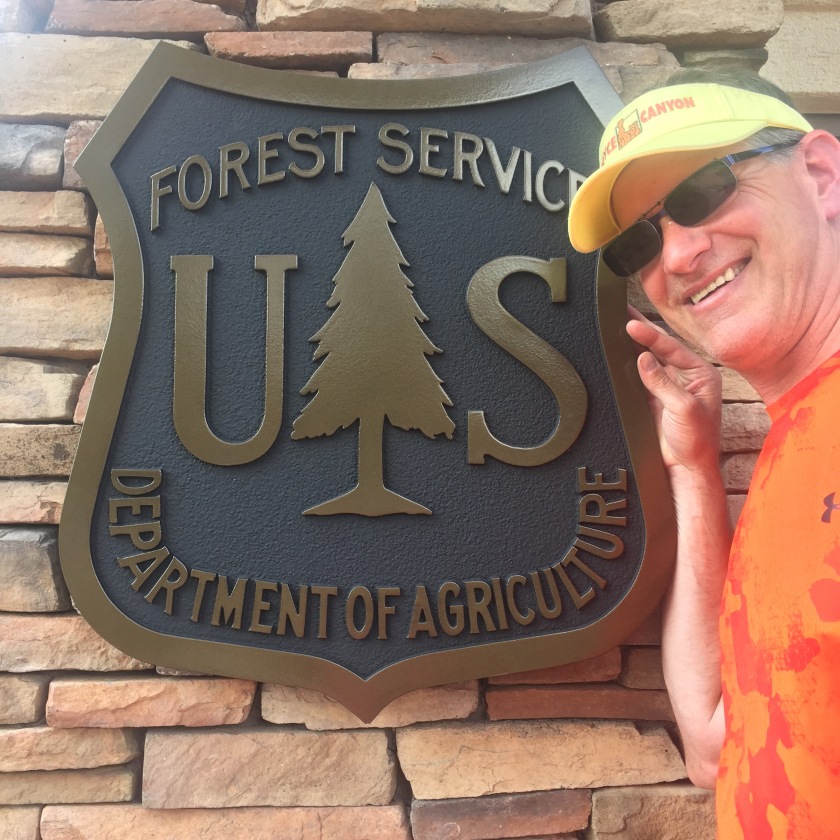 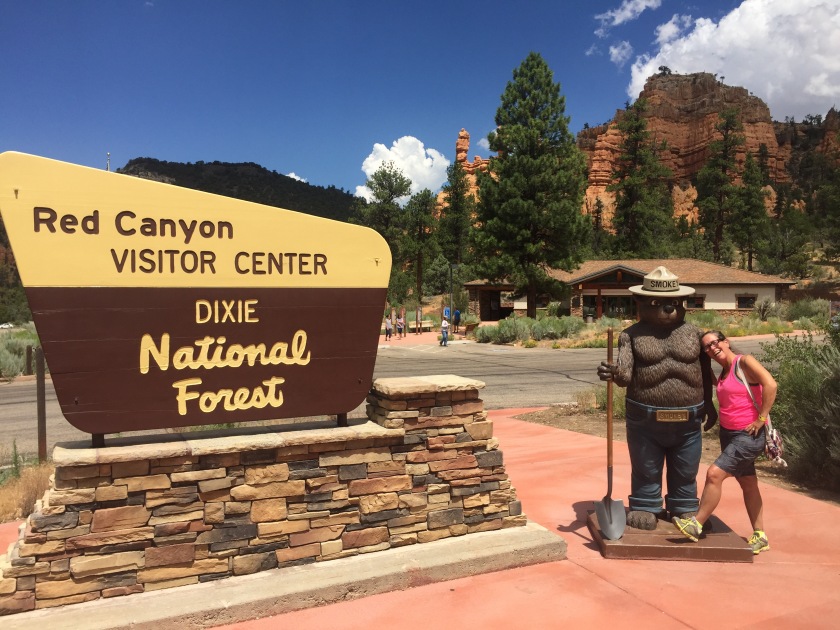 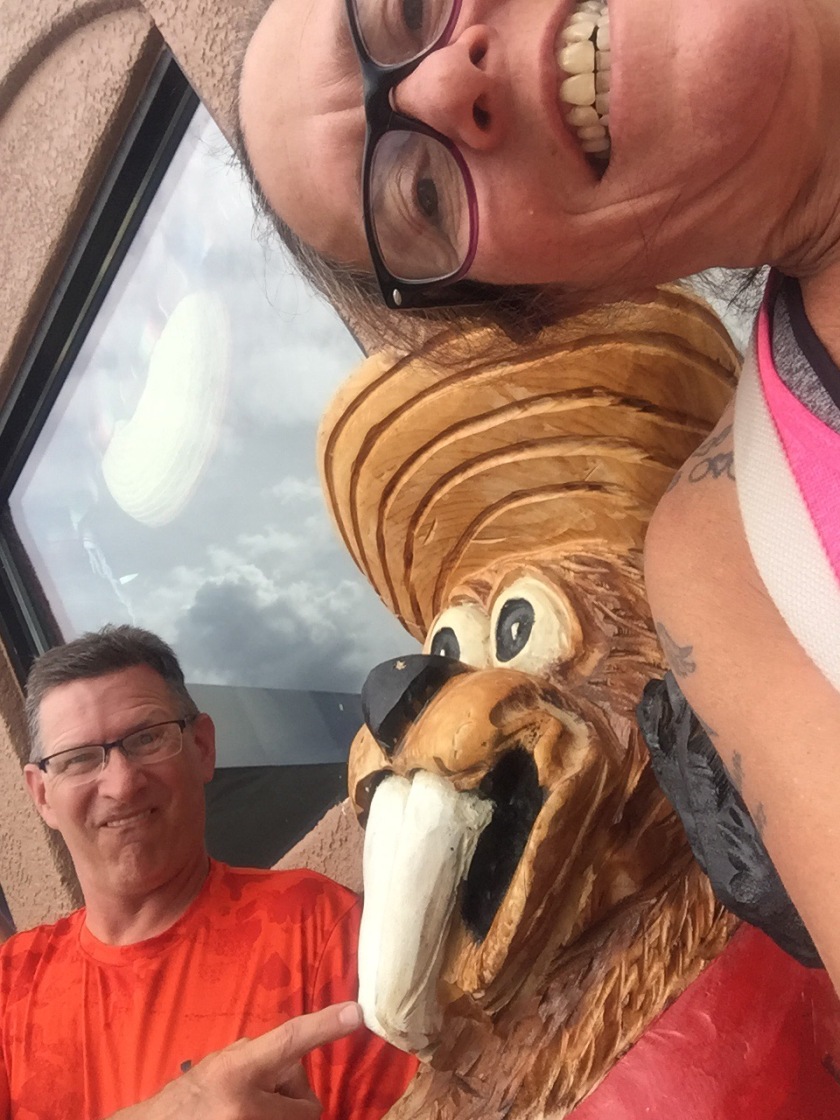 Our next destination was Cedar City. We decided to drive on another scenic byway, this time pulling the camper to a campground in the Dixie National Forest.

We found an amazing site all to ourselves at the Duck Creek Campground. 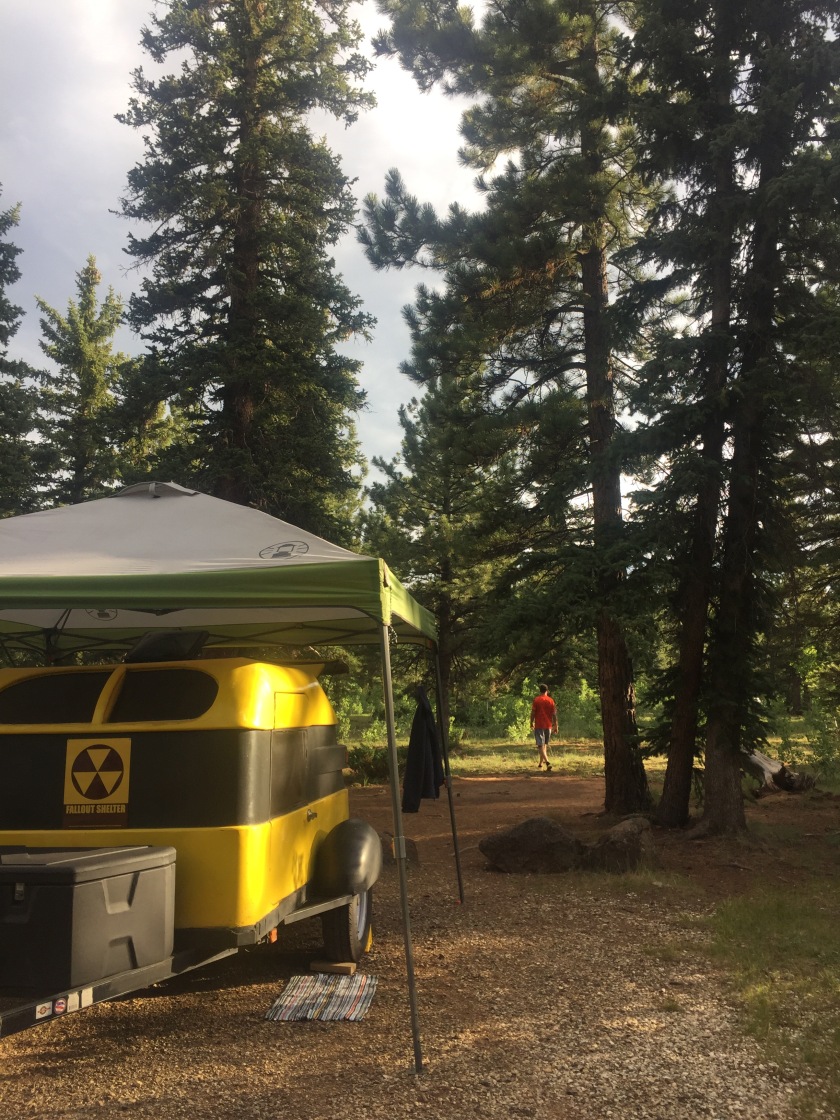 We set up camp and then headed out to see another National Monument. 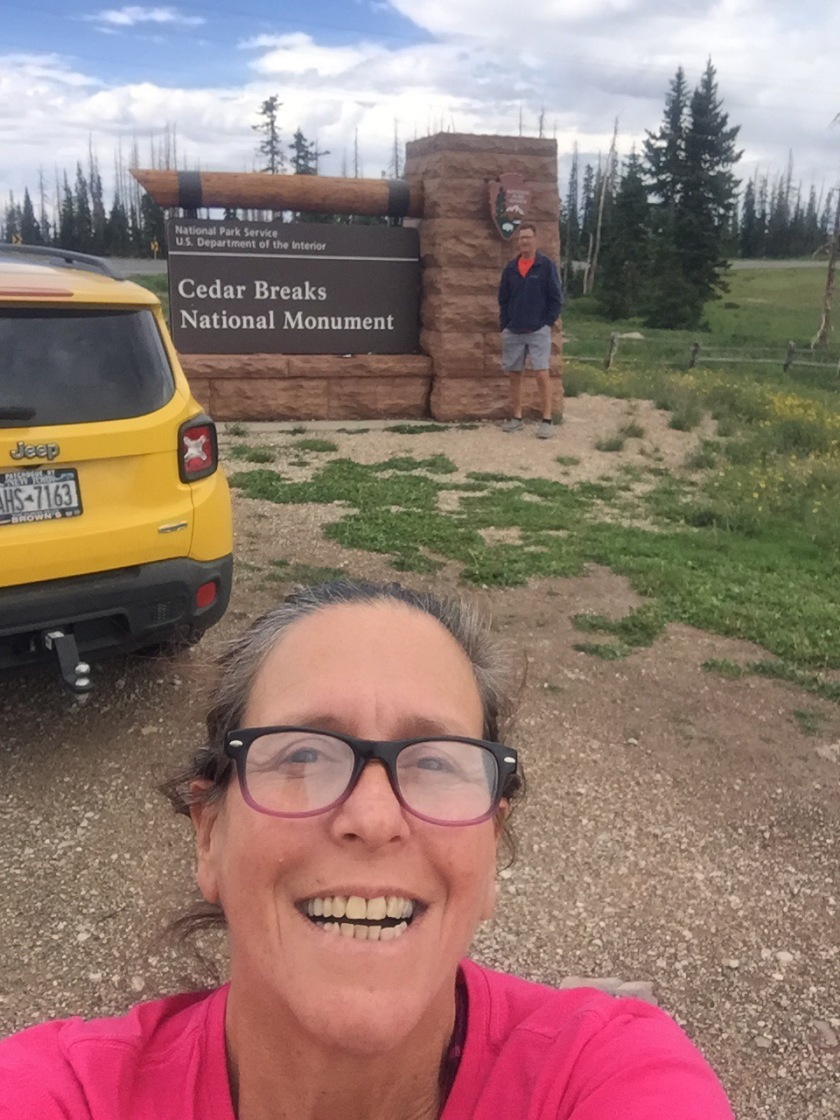 We headed back to the campsite and barbecued some steaks and had dinner while being harassed by squirrels.

In the morning, we decided to do some more exploring. We drove to the town of Kanab, Utah and went to the Best Friend Animal Sanctuary. A high school friend, Jackie, recommended it and it was great. Not just what they are doing. To save animals but the location itself was breathtaking.

After the tour we stopped at a small cave on the side of the road that was purchased in 1951 and used as a bar and dance hall. It was pretty cool both in temperature and the looks of it.

From there we drove to the Pink Coral Sand Dunes. We’ve been to Dunes before, but never this color and such fine sand. Amazing. Plus we were able to take a shower for 2 bucks as an added bonus!!

So all in all, today was a super busy day. It’s currently raining so it’s a perfect time for me to sit in the tear drop and Blog Away! Plus a chance to look at the maps and see what tomorrow brings.  I really love this part of the country!